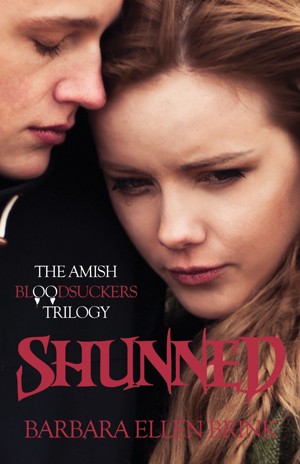 By Barbara Ellen Brink
Rated 5.00/5 based on 1 reviews
Orphaned and left to pursue her destiny alone, Jael leaves Nevada and moves to the Loon Lake Amish community of Minnesota. Living with Amish grandparents and learning to live the plain and simple life... she seeks her chance to destroy the Bishop once and for all. More
With tongue firmly in cheek and genuine Amish-made stakes at hand, Jael the vampire slayer is ready to kick some serious bloodsucker butt. Seriously.
Move over Buffy – there’s a new slayer in town! Raised in the desert of Nevada, and destined for the Minnesota Loon Lake Amish Community, Jael Shetler is the Chosen One.
Trained by her uncle and father in twenty-one different forms of hand-to-hand combat – she also throws a knife with the speed of a bullet, and is accurate to within two centimeters of a cold, dead heart with her crossbow – she is a bloodsucker’s worst nightmare.

In Shunned, Jael leaves Nevada and her close friends, Brianna and Shadow, behind. She travels to the Loon Lake Amish community in Minnesota where she moves in with grandparents she’s never met and learns to live the plain and simple life... at least as plain and simple as she can. She definitely is NOT giving up her cell phone or her crossbow!
While finishing out the school year at Loon Lake Public High School, she meets the guy of her dreams…someone to keep her company when she goes out staking vampires at night.
Her true purpose is to destroy the Bishop, the oldest and most powerful vampire of all. But first, she must find out just what his diabolical plans are for the teenagers of the community, and put a stop to him and his undead followers before it’s too late.
Available ebook formats: epub mobi pdf rtf lrf pdb txt html
First 15% Sample: epub mobi (Kindle) lrf more Online Reader
pdb
Price: $2.99 USD
Buy Add to Library Give as a Gift
How gifting works
Create Widget
Tags: dark humor minnesota vampire slayer vampire horror teenage heroine teen action adventure horror action adventure amish bloodsuckers barbara ellen brink young adult vampire fiction
About Barbara Ellen Brink

This second installation in the Amish Bloodsucker Trilogy is just as appealing as the first. Teenage Jael is the "Chosen One", born to slay the vampires that have infiltrated an Amish community in Minnesota that was the home of her parents, but since Jael and her parents have been on the run while Jael grew up and honed her skills, Jael has never been there. With her parents now dead, Jael must leave behind her friends in Sunburn, Nevada to live with the Amish grandparents she hadn’t known existed and get on with her destiny.

The transition to Amish living isn’t easy, but fortunately her grandparents are thrilled to have her there and she’s allowed to attend the public high school for now, where she meets a boy she starts to fall for in spite of herself. Between farm chores, school, and hunting vampires Jael is busy from before sunrise to long after sundown. Named for a heroine from the Old Testament, Jael takes her vampire slaying mission seriously, but she has a humorous edge to her outlook and an occasionally flippant teenage attitude that add to the fun of reading these books and keep you rooting for her.

Barbara Ellen Brink does a good job conveying the sights and smells of simple country living and the pushes and pulls of Jael’s sometimes complicated priorities. There are Christian elements to the story, but they are multi-denominational and not heavy handed.