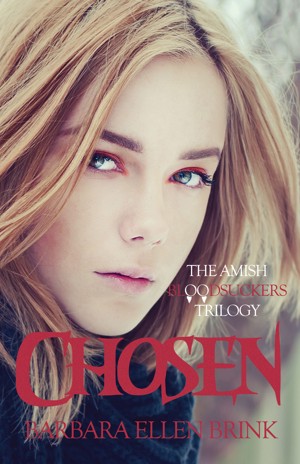 By Barbara Ellen Brink
Rated 5.00/5 based on 1 reviews
Jael is an average teen girl with over-protective parents, an unrequited crush on the hottest guy at school, & a best friend she shares everything with. Until her parents let her in on the secret they’ve kept for nearly 16 years…

Jael is the Chosen One. Born to be a vampire slayer, her destiny was written in the Book of the Shunned. She's been chosen by God to set the Amish free from vampires. More
With tongue firmly in cheek and genuine Amish-made stakes at hand, The Amish Bloodsucker Trilogy sets off like a bat in the belfry. Jael the vampire slayer is ready to kick some serious bloodsucker butt. Seriously.
Move over Buffy – there’s a new slayer in town! Raised in the desert of Nevada, and destined for the Minnesota Loon Lake Amish Community, Jael Shetler is the Chosen One.
Trained by her uncle and father in twenty-one different forms of hand-to-hand combat – she also throws a knife with the speed of a bullet, and is accurate to within two centimeters of a cold, dead heart with her crossbow – she is a bloodsucker’s worst nightmare.
Her parents, forced to leave their plain and simple upbringing to escape the clutches of the new Bishop – an ancient and powerful vampire with plans to use the Amish Community as his own personal Jamba Juice – raise and train their daughter to continue the fight begun thousands of years earlier by another Jael, and to fulfill the prophecy in the Book of the Shunned.
Soon Jael is turning sweet sixteen and then … all hell will break loose.
This is author Barbara Ellen Brink’s first foray into the world of Amish and Vampires – both of which scare her – but it won’t be the last. Watch for the 2nd book in The Amish Bloodsucker Trilogy… Shunned
Available ebook formats: epub mobi pdf rtf lrf pdb txt html
Price: $0.99 USD
Buy Add to Library Give as a Gift
How gifting works
Create Widget
Tags: young adult fiction vampire series vampire slayer young adult humor teenage heroine horror action adventure amish bloodsuckers series amish vampires barbara ellen brink teen and young adult fiction
About Barbara Ellen Brink

I could not resist this Amish/vampire genre mash-up. Teenage Jael is the "Chosen One", born to slay the vampires that have infiltrated an Amish community in Minnesota that was the home of her parents. As befits a vampire slayer, Jael is named after a heroine of the Old Testament who killed an enemy of God's chosen people by driving a tent stake through his head.

In order to protect Jael until she develops her full powers her family has been on the run since before she was born, but now that she is about to turn 16 it's time for her to step up to her God-given responsibilities. Jael has had to live life as an outsider, unable to attend school functions like football games and having to spend hours a day practicing martial arts with her father, but with the help of her best friend Bree Jael is pushing at those boundaries. Bree doesn't know the truth about Jael, but somehow Shad, a Native American tracker who is also a student at their school, does. Shad is a good looking loner, but it is Bree who is interested in him, not Jael. Jael takes her preordained mission seriously but she has a humorous edge to her outlook, which adds to the fun of reading the book.