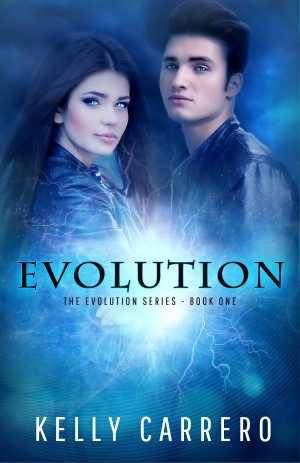 Jade thinks she is going insane, but her boyfriend, Aiden Scott, knows better. He knows what she is. And like him, she was born this way.

Now if finding out that people like her shouldn't exist isn't bad enough, Jade's best friend is kidnapped by the psycho who terrorises her dreams. With the help of Aiden, Jade has to figure out how to save her before it's to late.

But what Jade doesn't know is not everything is what it seems. She is merely a puppet in a sadistic game to find out what she is truly capable of, and that game has only just begun.
Download: epub mobi (Kindle) pdf more Online Reader
rtf lrf pdb txt
Price: Free! USD
Add to Library
Create Widget
Tags: paranormal romance ya fantasy young adult scifi young adult paranormal evolved young adult series

(Source: Downloaded for free from Amazon.co.uk.)
17-year-old Jade has no idea what is going on when she ends up in the hospital after having crashed her car, and watches her injuries heal before her eyes.
When her boyfriend Aidan then tells her that it’s because she’s immortal – just like him, and that they also have all these other cool superpowers – all because they are using 100% of their brains.

When Jade’s best-friend Chelsea then goes missing, it’s up to Jade and Aidan to find her.
Can they find Chelsea in time? Who is after Chelsea and Jade? And what do they want?


I don’t know what it was about this story, but I just found it so boring that I had difficulty finishing it.

It started out okay, but I don’t know if it was the writing style, or just the story, but I just didn’t believe it, and I didn’t enjoy it. I felt like everyone treated Jade like a child, and she allowed them too, and the story just dragged.
I didn’t quite get the whole immortal thing either. How does being able to use all 100% of your brain make you immortal? How does it make you be able to eat loads without putting on weight? How does it make you heal instantly from cuts and burns and stuff? I just don’t buy it. How does it make you capable of teleporting? It all just seemed a bit farfetched to me. I mean the having visions, and even telepathy I could have gotten on board with – they seem like mental abilities, but the rest?
I also found Jade’s mom to be a bit weird at times too – telling Jade to just take time off school? Telling her to go stay at her boyfriend’s house? Is that not odd behaviour?

Anyway, the story mainly revolved around Jade’s missing friend Chelsea, and Jade and Aidan and the crew trying to get her back somehow. They all used their magical mystery powers to do all this wonderful stuff like teleporting, reading minds, etc. to work out who had took Chelsea, although when they actually found her it was almost by accident!
The ending of this also frustrated me a bit. We were basically left with a cliff-hanger, and I really don’t have it in me to read any more books in this series.
Overall; a YA paranormal novella that just bored me.
4.5 out of 10.

You have subscribed to alerts for Kelly Carrero.

You have been added to Kelly Carrero's favorite list.

You can also sign-up to receive email notifications whenever Kelly Carrero releases a new book.