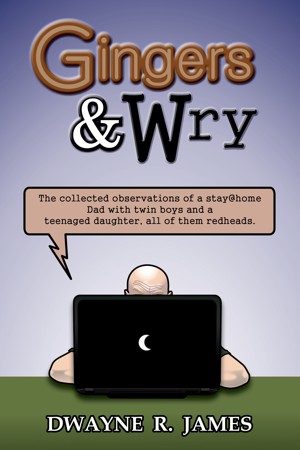 By Dwayne R. James
Rated 5.00/5 based on 3 reviews
"TWINS. It's the kind of word that only ever happens to somebody else." This is the kind of dry humour that characterizes Gingers & Wry, an autobiographical account of a stay@home Dad of tenacious toddler twin boys. Join the author as he finds the humour in situations that would make the Dalai Lama scream out in anger. You'll never see the world the same once you've seen it through Dwayne's eyes. More
Gingers and Wry is frequently hilarious, occasionally poignant, and consistently honest—sometimes, brutally so.

This book is a collection of quips and comments, originally posted online, threaded together by a narrative that describes four years in the author’s life as he moves from being laid off, and into his new role as a stay@home Dad for twin boys.

Writer and watercolour artist Dwayne James lives outside of Lakefield, Ontario where he writes and paints as often as he can, that is when he's not spending time with his very forgiving family.

Dwayne studied archaeology in University, and as a result learned how to write creatively. "The most important skill I learned in University," he says, "was the ability to pretentiously write about myself in the third person."

With no formal art training, Dwayne has always preferred the self-guided, experimental approach. In fact, he taught himself how to illustrate archaeological artifacts while completing his Master's degree at Trent University. Said his thesis supervisor at the time: "There might not be much in the way of coherent theoretical content in Dwayne's thesis, but damn, it looks pretty!"

After spending close to a decade as a technical communicator at IBM, Dwayne opted to look at their Jan 2009 decision to downsize him as an opportunity to become a stay-at-home Dad for his young twins, and pursue his painting and creative writing whenever they allow him to do so. It is a decision that continues to make him giggle with wild abandon to this very day.

Reviews of Gingers and Wry by Dwayne R. James

I laughed out loud more than once while reading it. I really enjoy your writing style Dwayne! :) It was a great read.

You will love it. I can vouch for that. I have just finished reading the Gingers and Wry book. Thanks for the laughs and also for helping me put child rearing into perspective. I am going to hug my boys tightly and embrace this time I have with them.
When is your next book coming out?

Just finished reading Gingers & Wry, and must say I thoroughly enjoyed it. I laughed out loud more than once. Congratulations on a fun book!!

You have subscribed to Smashwords Alerts new release notifications for Dwayne R. James.

You have been added to Dwayne R. James's favorite list.

You can also sign-up to receive email notifications whenever Dwayne R. James releases a new book.