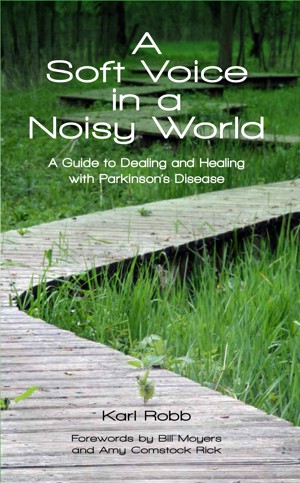 By Karl Robb
Rated 5.00/5 based on 1 review
Whether you are newly diagnosed or have had Parkinson's disease for many years, this book is a compilation of insights, practical tools, and inspirational suggestions for improving your mind-body connection and empowering yourself to heal. More
Whether you are newly diagnosed or have had Parkinson's disease for many years, younger or older, the lessons that Karl Robb offers in this book will apply to your situation. A culmination of over twenty years of personal experience, in A Soft Voice in a Noisy World, Karl Robb provides an assortment of tips and suggestions that have made a difference in his life and benefited him in his personal struggle with PD. This guide shows how one man successfully navigated the medical gauntlet with the support of his wife and care partner, and found his answers, often in the unlikeliest of places.
With forewords by award winning broadcast journalist and author, Bill Moyers and Parkinson's Action Network CEO, Amy Comstock Rick.
Drawn from the pages of the popular Parkinson’s blog, ASoftVoice.com, this once-skeptic turned Reiki master describes the importance of complementary therapies to “Parkinsonians” through his personal mind, body, and spirit journey, detailing the role these have played in the course of his personal healing. In this book you will learn how through maintaining a positive attitude and utilizing Reiki and other complementary therapies, Karl has kept his Parkinson's in check, slowed the disease's progression, and amazingly seen signs of improvement, even after over two decades of dealing with PD.
This book is a compilation of hundreds of insights and practical tools intended to add inspiration and ease to your daily life, including suggestions and resources for bettering your patient-doctor experience, living a productive and happy life, staying fit and active, traveling, participating in support groups, being a PD advocate, improving your mind-body connection, and empowering yourself to heal.
Available ebook formats: epub mobi pdf rtf lrf pdb txt html
First 20% Sample: epub mobi (Kindle) lrf more Online Reader
pdb
Price: $9.99 USD
Buy Add to Library Give as a Gift
How gifting works
Create Widget
Tags: neurology selfhelp reiki parkinsons disease chronic illness complementary therapies holistic health
About Karl Robb

Karl Robb has had Parkinson’s disease (PD) for over twenty years. With symptoms since he was seventeen years old, Karl was diagnosed at the age of twenty-three. Now in his forties, he is a Parkinson’s advocate, an entrepreneur, an inventor, a writer, a speaker on PD issues, a photographer, and a Reiki master.
Karl holds a bachelor’s degree in English from the University of North Carolina at Chapel Hill. His work on PD issues has been featured by The New York Post, BBC Radio, the CBS News, and NHK World Television, as well as several Washington, D.C., television stations.
Karl is a board member and the Virginia state director of the Parkinson’s Action Network and a board member of the Parkinson Voice Project.

This is a very well written book about life as a Young Onset Parkinson's patient. I wish my Neurologist would have recommended something like this when I was first diagnosed. It would have made navigating life with Parkinson's a much smoother ride. IF you have Parkinson's, or know someone who does, get this book today!

You have subscribed to alerts for Karl Robb.

You have been added to Karl Robb's favorite list.

You can also sign-up to receive email notifications whenever Karl Robb releases a new book.