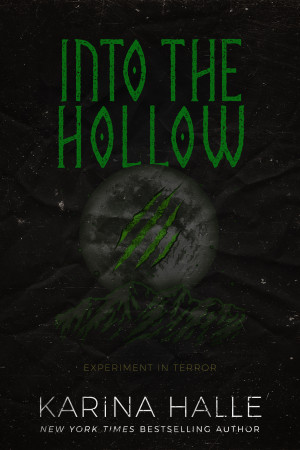 Into the Hollow (Experiment in Terror #6)

From a rock music journalist to a New York Times & USA Today bestselling author for The Pact, Where Sea Meets Sky, The Artists Trilogy series, and over 20 other books, Karina Halle has seen a lot of the world. Luckily, all the years of dabbling in different careers and traversing the globe has given her the perfect background for her stories. Whether it's writing horror romance, romantic suspense or contemporary romance, Karina manages to combine very real people and relationships with very edgy circumstances. When she's not writing about flawed characters or chilling situations, you can find her on Salt Spring Island, BC, drinking wine in her 1920's farmhouse with her husband and their adopted pitbull.

Also in Series: Experiment in Terror

Into the Hollow picks up right where On Demon Wings left off and begins with a tough decision for our gal Perry Palomino. A decision I was silently squeeing over going "SAY YES, YOU NUMPTY!" It also shows us a side to Mr. Declan Foray we've never really seen before since he's always been in a relationship in the past. I think I rather like the free and single version of Dex. Again, SQUEE!

And there's not just the changes in Dex's behaviour to get used to, but you'll also recall he'd transformed a lot physically when he (eventually) showed up in On Demon Wings (he was all buff and stuff). And that's not the only difference we see in him over the course of this book.

If you'd asked me before I began Into the Hollow I'd have told you it wasn't possible for me to love Dex more than I already did, but it turns out that's total bumf because I found him even more irresistible in this book than ever before! He was just so patient but still determined, cheeky, badass, adorable, annoying and absolutely everything in between. I just love him!

The plot wasn't quite as creepy or scary this time but it was definitely action-packed and full of some great dramatic scenes (which I loved). In fact, I'd say this instalment was more Urban Fantasy than Horror—much like Red Fox was—and it was super duper fun and got the old adrenaline pumping nicely.

As well as dealing with the emotional fallout from the last couple of books, Dex and Perry are asked to investigate a potential "creature" sighting in the Canadian Rockies. But even with everything they've seen, they're unsure how much credence they can put in the testimony of one of its supposed victims, so the only solution is to go check it out for themselves.

There was also a moment or two of this book that made me very interested in things to come with regards to Dex and his past demons. Very interesting developments indeed.

My new favourite nickname for an animal (or vegetable, or mineral) ever has to go to Twatwaffle the llama. Pure unadulterated genius and my new favourite word of the week.

Sigh. Of course, the sad thing is now I've run out of books! I knew this would happen, obviously, but I didn't think it would feel quite this crappy. I've got the shakes, withdrawals, extreme lethargy (although I think I had that last one already) and just general uninterest in anything anybody whose name isn't Karina Halle has written. Ever.

What's a rabid fangirl to do?

I can't get enough...I want more to read! Can't wait for the next one.

(reviewed 22 days after purchase)
Joy Pelloquin reviewed on Dec. 11, 2012
(no rating)
This series is very addictive, read them all in about a week. Can't wait for th next one to come out. Would definitely recommend this series to anyone that enjoys romance and horror stories.

I absolutely love this series. I blew threw the entire series in about a week and am looking forward to seeing more from Karina Halle!

I absolutely loved Into The Hollow!!! It was scary as hell and I just love, love Dex and Perry!

Great book finished in one day, looking forward to the next one loved the ending. Nice!

I am absolutely hooked on this series! I almost had a heart attack when I saw Barnes & Noble did not have "Into the Hollow" for Nook. Thank you Smashwords for saving the day!
I am not a big person for reviews, but I have made sure to leave them for each book in the series because I love these books.

(reviewed 21 days after purchase)
kathleen kearney reviewed on Dec. 5, 2012
(no rating)
Ok, I normally dont take the time to write a review but the series," Experiement In Terror" was so engaging, I feel the need to support Karina Halle. She has created characters that are so believable, especially for a paranormal read. They are young, hip, insecure, wierd, I dont know, just remind me of real people I know or would like to know. I love the way music is a big part of their lives. I read the series in a week and I am sad that I have to wait for the next one. Loved it!

This book is so awesome!! I read it in 2 days and could not put it down.....it is a series so please look up the eit series and read all of the books. You won't be disappointed!!

Great series! Looking forward to the next one.

You have subscribed to alerts for Karina Halle.

You have been added to Karina Halle's favorite list.

You can also sign-up to receive email notifications whenever Karina Halle releases a new book.