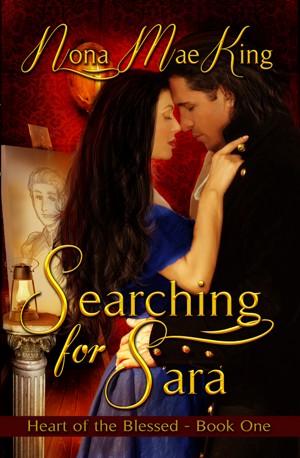 Sara’s benefactor is handsome widower Christopher Lake, a philanthropist dedicated to helping the less fortunate redefine their future. Though devastated by the loss of his wife, he dedicates himself to her last request: To provide Sara the means for a brighter future.

Sara’s gift of art inspires Christopher’s sponsorship, and he is determined to protect her gentle heart while propelling her into artistic society. Even if he must press her forward beyond her shy nature. But when a local paper weaves tales of a romantic entanglement, Sara is struck by the stark reality of a growing devotion. Caught in the whirlwind of debuts and dinner parties, she has fallen in love with the one man she believes she does not deserve.

Nona King was born and raised on a 30-acre homestead outside Aurora, Oregon, in 1972. In the late '80s she began writing feature-length plays, young adult fiction, and Christian romance novels. From '99 to '05 she experimented with myriad worlds and character-types through VG fan-fiction under the pseudonym Mintbaby. She is the author of more than 30 novellas and short-stories, including fan favorites such as the 'Bookworms and Booya!' series, the 'Terra' saga, and 'A Rose by Any Other Name.'

In 2006 King moved to the Seattle area where she met and married her husband and once again focused on her original fiction, publishing one paranormal fantasy and four romance novels from 2008 to 2014. Other projects include her young adult fiction series, Changing Scenes, her epic fantasy, Resurrected Honor, and her first romantic comedy, The 'Ex' Dating Formula.

King has dedicated herself to writing true-to-life characters, be they villain or hero, so readers can experience life and its many passions. All her stories focus on faith, honor, and the importance of communication and trust in our relationships.

Searching for Sara, Book Trailer
Sara Little has ached to live in America. But being born of a single mother in London’s working class, she could only dream. Drawn to the possibility of a new beginning, she follows God’s whisper into the unknown. But more awaits than the realization of her dreams. Caught in the whirlwind of debuts and dinner parties, she has fallen in love with the one man she cannot attain.

Also in Series: Heart of the Blessed

Reviews of Searching for Sara by Nona Mae King

I loved reading this beautiful story. I love how Sara truly trusted and relied on the Lord, she allowed Him to help her with all her fears.
Thank you Nona for writing such a beautiful story

(review of free book)
Donna reviewed on July 13, 2022
(no rating)
I loved reading this beautiful story. I love how Sara truly trusted and relied on the Lord, she allowed Him to help her with all her fears.
Thank you Nona for writing such a beautiful story

I enjoyed it!!! Though shy and reserved, I love that Sarah was able to help Christopher heal. Her boldness, no doubt came from her faith in Jesus.. it's a must read.

This is one of the best historical novels I've ever had the pleasure of reading. Masterfully woven with suspense and intrigue intertwined and with sweet romance sprinkled all over it, not forgetting the Christ factor.

Ok I absolutely loved this book! Its a must read! The writer did a fantastic job of passing on the message that God loves us, we can trust God, his plans for us are of good and not evil. I loved the character's! I feel like I know them already. I love Teddy!!! Teddy! Teddy! Teddy! I wish I had his number lol! Best scene was the confrontation between teddy and the newspaper publishing guy! Teddy rocked! God bless you Nona Mae King with beautiful ideas!

Two hurting people, Sara Little and Christopher Lake. Sara is from England, an orphan whose mother died when she was twelve. Her father is unknown to her. In the late 1800's, all an orphan could expect from life was continual servitude. Christopher and his wife lived in Richmond, Virginia and owned a prosperous art gallery. They made it their mission in life to try to give someone a new start in life by sponsoring them. Christopher's sister and brother-in-law were often involved by scouting out someone for them to assist. This time, they learned about Sara and recommended her as their new recipient.

Sara's life had been a series of hardships. Her mother was a ladies' maid and life was wonderful when she was alive. But after her death, Sara bounced from employer to employer every few months; no one trusted an orphan. Often the recipient of verbal abuse, Sara's last employer too often made unwanted physical advances on her. Finally, she ran away to stay with a priest, a friend of her mother's, determined to start anew by going to American. Two years later she finally earned passage on a ship to New York.

Christopher Lake met Sara when she arrived in Richmond by train. It didn't take long before she realized that Chris's beloved Carla had died nearly two years before and he hadn't properly grieved for her. But he was determined to sponsor Sara as he and his wife had planned on when she was alive, especially after he discovered Sara's talent as an artist. She made friends with little Gwen, Mr. Lake's daughter, and with his sister and brother-in-law Dix and Paul. She became a long-term guest in his sister's home. It took Sara quite
awhile for her to get used to being on the receiving side of the serving tray. She even had a maid of her own. None of this turned her head, or made her proud.

What's impressive about Sara is her strength of character. Hardship and unfair treatment growing up had not embittered her or made her angry. It seemed to fortify her faith in God and in His faithfulness. He was her fortress and strength and she drew upon that source often while endearing herself with Christopher, his household and staff, the gallery staff, little Gwen.

Christopher himself was an artist, but since his wife's passing he had become cynical and angry--at himself, at God, at the world. He had lost his ability to see the images necessary to continue his art. So he withdrew into himself, unable to express his grief and pain in his loss.

When Sara arrived her sweet nature began to work on him, her natural empathy easing his torment. She sensed his need to move on and his inability to do so. She began to share her insights from her own experience in losing a loved one and he listened, if a bit reluctantly at first.

To me, this lovely story is a bit reminiscent of Charlotte Bronte's Jane Eyre. Not only did Sara help Chris through the grieving process, she was able to reach his frozen heart and release his vision for art again. Her persistence aided his return to a closer relationship with God. Sara herself gained confidence in her new life as her art was exhibited in the gallery and enthusiastically received by the public
and art critics alike. And little Gwen blossomed under the attentions of a loving mother figure. Of course, no steps forward come without some conflict and difficulties.

I love the characters in this story. Sara just climbs into your heart and makes herself right at home. The author did a wonderful job of giving her a cockney accent that adds to her charm. The reader feels empathy for Christopher in his dilemma as an artist who is lost without his muse. Since this is the first book of a series, I can see that there will be more to the story to look forward to in time. I hope
it is soon.

Sara Little’s mother died when she was only twelve and for the next twelve years she worked as a servant for several different families who were members of the English aristocracy. Some of her jobs were somewhat enjoyable but the last one was terrible due to the cruelty of her employer. Sara kept hearing the whisper of God and she decided that she had to escape to America. The story began in London in early 1892 when Sara finally escaped from her employer.

Christopher Lake was a widower who could not seem to get past the death of his wife. His five year old daughter Gwyn was the only bright spot in his life but he was beginning to neglect her in some ways. His wife had promised to help Sara and he was determined to keep that promise not knowing the toll it would take on his life. He had not painted since the death of his wife and had very little interest in the art gallery that he owned. Sara’s artistic ability, kindness, and faith was an inspiration to Christopher and through his sponsorship he was determined to protect her spirit and reputation.

The author has a knack for writing romance novels and she did an excellent job of developing the plot, the characters, the dialogue, and the scenes. I enjoyed how the author incorporated the crafts of tatting and crochet into the story. These days it seems that quilting is about the only craft that gets mentioned. I was drawn into the story on the first page and was wanting to read more when I reached the end. I was touched by Sara’s ability to pray at any time and in any situation and she had a strong faith in God that never wavered and never let her down. Sara was such a gentle soul and was just what Christopher needed in his life to get through the grief of losing his wife. I became so involved in the story that I was feeling many of the things that Sara was feeling and I could also feel Christopher’s grief and confusion. Sometimes I was laughing with the characters and other times I was crying with them. The author did a commendable job of showing how Christopher overcame grief and Sara overcame self doubt. Through the story of Sara and Christopher, she also emphasized how one has to move on with life and let go of the past and welcome the future and whatever it may hold.

I would recommend this book to anyone who enjoys a well written historical romance. There was even a little mystery in the book concerning some of Christopher’s charcoal drawings but don’t want to say more and give away any of the plot. I read the teaser for the second book in the series and I am really looking forward to reading the continuation of the story.

Many thanks to the author for a complimentary copy of the book in exchange for an honest review.

You have subscribed to alerts for Nona Mae King.

You have been added to Nona Mae King's favorite list.

You can also sign-up to receive email notifications whenever Nona Mae King releases a new book.