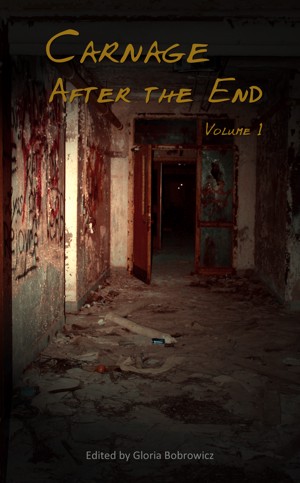 Carnage: After the End - Volume 1

By Gloria Bobrowicz
Rated 5.00/5 based on 1 reviews
The Apocalypse has come, leaving in its wake small pockets of survivors battling to stay alive; each carving out a new beginning for mankind...

The ten stories in Carnage: After the End – Volume 1 are the terrifyingly harsh and brutal realities those survivors must face. Each one takes us to a place where humanity’s stragglers are forced to battle with enemies outside of their control; mutant beasts, groups of depraved and desperate people, and the terrifying threat of a dwindling food supply. Their fight for survival gets even more difficult as they search among the tatters of civilization for the will to carry on.

In a world where society has collapsed and terror lurks around every corner, no one can be trusted and nothing can be taken for granted.

Also in Series: Carnage: After the End

There are a myriad of ways the World as we know it could end. Will it be cataclysmic like nuclear bomb drops, huge volcanic eruptions, continent destroying earthquakes or invasions of violent mutations? Or will it be something more slight that ends us like a financial meltdown or simple human greed and stupidity. Whatever the cause, the truth is the world will end someday and that day may well be today. Thankfully while society is still rumbling along nicely we all have the time to read apocalypse stories instead of wasting our time searching for food and clean water whilst hiding from gangs intent on pillaging.

The ten short stories here include a wide range of apocalypse scenarios, each dramatically different from each other. Predictability is an easy trap to fall into when writing End-of-Days fiction. But, thankfully the writers avoid the trap of toxic rain and nuclear fallout for the most part, choosing instead to focus on deeply human tales of survival.

'The Meat Men' by Rodney James Galley: Two guys are heading out towards Nasa. Stopping at a gas station they come across an emaciated pair of fellow survivors. Initial trepidation and mistrust are quickly put aside as both pairs trade in food and petrol but who was correct to fear the other?
'Begging Death' by Laura Diamond: A touching story of ultimate devotion set in world without death. Lucas hides his lover Peter from the powerful militia that rules the land. Peter's defiance and Lucas' desperation soon force the couple into a terrifying situation where an unthinkable decision has to be made.
'The Scurrying' by Christofer Nigro: In a world overrun by mutated rats, the leader of a tribe of survivors remains belligerent in the face of disaster and obsessed with mankind's survival...but at what cost?
'Scents of Danger' by Julianne Snow: Martha's mundane existence in thrown into turmoil as earthquakes wreak havoc releasing toxins from the Earth. Serving as a cook of scavenged food, her loyalty to her children is soon tested. What will she do to ensure their survival?
'Rescissions' by Shane Cashman: In a world of sand 'The Wanderer' discovers some old tech. Unsure of it's intended use, 'The Wanderer' listens intently to voice emanating from the device whilst all the time 'The Hounds' draw near.
'High Dessert, Starless Sky' by Michael Griffin: Lyle looks after Marnie after her husband abandons her. But is his loyalty to her misplaced and what will be the outcome of his decision to leave the woman to look after herself?
'The Hunger' by Kimberly A Bettes; Starvation leads a woman through a ruined city of desolation. Happening on a friendly face she fills her belly as she recalls how the world was brought to it's knees by something as simple as a price tag.
'Prophecy of Numbers' by Russell Linton: Marcus excels at evaluating catastrophe but miles away from home and desperate to find his family a voice of probability hijacks his mind and fuels his travels across a warring America.
'Mad World' by Adam Millard: As a murderous virus of insanity sweeps the world two people survive as best they can but one mistake puts their lives in danger.
'The Vault' by Shane R.Collins: A friendly neighbour offers salvation to a couple in return for work but as he lords it over his 'workers' resentment and hostility soon bubbles to the surface of this seemingly idyllic island of society that exists in a broken dangerous world.

If you like any kind of apocalypse fiction you are sure to find something interesting and fresh here. For anyone else you can just call it preparing for the inevitable.

NOTE: I was given this book for the purpose of review.