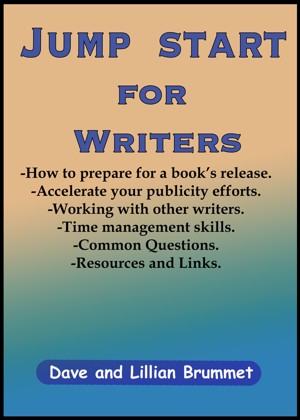 By Dave Brummet
& Lillian Brummet
This book will encourage readers to reach for the dream of seeing their work published. Discover what it takes to prepare for a book release, tips on working with another writer, networking, time management tips, and answers to common writer questions. More
Jump Start for Writers can be considered a precursor to the Purple Snowflake Marketing book we created, which provides a step-by-step guide to trearting your writing as a business – offering tips on being more efficient and effective in the office, and provides a guide for getting through the maze one often encounters in the realm of marketing. Always follow one major rule in marketing - Common Courtesy. Never make anyone work for anything. Make every option clear and easily accessible.

Learn about reviews, marketing, promotion materials, media kits, book production processes, resources, publisher's policies, royalties, distributor information... it is all here. With this information you can easily get a head start on your marketing plan.

Doing it right is essential - there is but one chance to make a lasting, first impression with a reviewer, editor, reader, organization or publication.

With this book you will:

Dave Brummet has lived his life in the interior of beautiful British Columbia, Canada and spends free time exploring the wilderness for inspiration. An avid photographer and history buff he likes to explore the old mines and ghost towns that riddle the backcountry of BC. Whether it is on snowshoes, by mountain bike or on foot with the two dogs they have rescued, he and his wife, Lillian, tend to tread a light path on the earth and leave only footprints and take only pictures when on their many excursions. Writing professionally since 1999 Dave co-authors with Lillian for most of their published work to date. He is in charge of the editing, proofreading, graphic work and cover design as well as the up-keep of their website and creating musical audio ads for Lillians’s radio show.

Also a professional drummer/percussionist and educator, Dave has collaborated on various songs that later led to him writing lyrics of his own, some of which are included in the Brummet’s most recent book of poetry, “Rhythm and Rhyme”. Initially it was Dave who first sparked the idea for the Brummet’s to walk this path they tread today – he decided to take a writer’s course to learn what he might be able to do with his short stories that he has compiled over the years. Most of those stories have remained unpublished to this day due to other projects taking precedence, but Dave plans to release some in the near future.

You have subscribed to alerts for Dave Brummet.

You have been added to Dave Brummet's favorite list.

You can also sign-up to receive email notifications whenever Dave Brummet releases a new book.