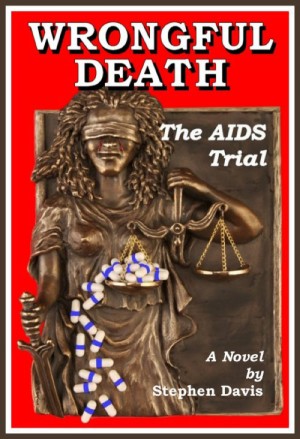 In his seventy-three years, Stephen Davis has been (in chronological order) one of the co-creators of "Up With People," a Physician’s Assistant in the U.S. Army (Vietnam vet), a commercial airline pilot, an Arizona State Senator, an Aide to L. Ron Hubbard in the Church of Scientology, President of an international management consulting firm (WISE), Director of Development and professor at Sherman College of Straight Chiropractic, computer software designer, horse whisperer, and cook and captain of an 80-foot whale and dolphin research ship (Kairos) in the Canary Islands.

He is the author of a number of books and won the George Washington Medal of Honor from Freedoms Foundation for his published article, "The Government Versus the Economy," and has most recently traveled the world delivering his Holographic Universe Workshop series.

Reviews of Wrongful Death: The AIDS Trial by Stephen Davis

I regret having to award even one star to such a piece of trash propaganda masquerading as a novel. It like the companion volume Are You Positive are junk science from HIV denialists who have not the merest clue about actual microbiology or epidemiology. The story is based on the typical lies spread by those who simply do not care that HIV causes AIDS and that it is a treatable disease and not some kind of a governmental/pharm industry conspiracy.

The "science" in this bilge has been thoroughly debunked by real researchers using proper techniques and reasoning who are peer-reviewed rather than fellow travelers in the psychotic world of HIV deniers.

As for the great reviews, forgive me but I suspect that they are just as phony as the plot and conclusions of the book.

Wow, this was an eye opener. I can't imagine the research that went into this book, and the intricacies of the testimonies included. I am so much more informed about HIV now and truly am appreciative that Mr. Davis offered this book to us. Thank you!

P.S. I'm in the process of reading the sequel, Are You Positive. This book is even more detailed in its description of the AIDS virus and HIV, I am learning so much about both SEPARATE issues.

This is one of the BEST books to tackle this subject. Stephen Davis, thank you, and I hope you continue along this subject which is so sadly still misunderstood!

I read this book in two days. It was excellent. It put together a lot of things about AIDS and HIV that I didn't understand. There is still a lot I don't and I will try and read it again because there is a lot of info in it that needs to told to public and people need to listen and pay attention, I'm sure this is going on with a lot more then we the public know. I'm going to download more from this author he writes very well.

You have subscribed to alerts for Stephen Davis.

You have been added to Stephen Davis's favorite list.

You can also sign-up to receive email notifications whenever Stephen Davis releases a new book.