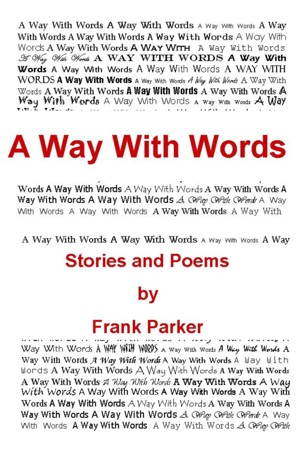 A Way With Words

A collection of short stories and poems, some funny some tragic; some topical some nostalgic; all exploring aspects of the human condition. More
The title poem A Way With Words is a lament from a writer who lacks confidence in his ability.
In Sibling Rivalry a brother discovers the source of his sister’s suddenly acquired wealth.
In Moonlight Revelation a couple find forgiveness when one becomes the victim of a crime.
Keep the Giraffe Burning is a poem in which a man recalls his first encounter with surrealist art.
The Wall, another tale involving sibling rivalry sees a man constructing a barrier between himself and his sister. We do not discover the real reason until the last line.
In The Box a widow speculates about the contents of a parcel.
The Bubble Burst contains some racy humour as it describes an old man’s foray in to the past.
Poems about a 1940’s Christmas and a man rescued from alcoholism by friends who bend the rules to help him secure a job are followed by To a Dark Place Slowly Falling, a story which occupies the latter half of the book and explores the effect of having witnessed a workplace fatality on a man’s subsequent life.
Available ebook formats: epub mobi pdf rtf lrf pdb txt html
First 20% Sample: epub mobi (Kindle) lrf more Online Reader
pdb
Price: $0.99
Free! USD
Buy with coupon Use the code EW100 at checkout to get this book for free during our site-wide promotion!
(Offer good through March 13, 2021 )
Have a better coupon?
Add to cart, then apply your coupon
Add to Library Give as a Gift (using coupon)
Have a better coupon?
Add to cart for gifting, then apply your coupon
How gifting works
Create Widget
Tags: poetry tragedy fantasy short stories ptsd humour sibling rivalry surrealism
About Frank Parker

Frank Parker's writing has been likened to that of Laurie Lee, Ian McEwan and Charles Dickens. Not bad for a septuagenarian who came to writing late in life.

Frank is a retired Engineer. He spent most of his working life in England where he was employed by UK based multi-national companies. He always wanted to write but has only found the freedom to do so since retiring to Ireland in October 2006.

Formerly resident in Portlaoise, he now lives with Freda, his wife since 1963, in Stradbally, Co. Laois, Ireland.

To date he has 4 e-books available on Smashwords, 2 novels and 2 collections of poems and short stories.
He writes about people facing the challenges of history: The Norman conquest of Ireland, the dramatic changes in attitudes to sex and sexuality of the 1970s.

He is currently researching and writing about the famine that struck Ireland between 1845 and 1852.

Reviews of A Way With Words by Frank Parker

You have subscribed to alerts for Frank Parker.

You have been added to Frank Parker's favorite list.

You can also sign-up to receive email notifications whenever Frank Parker releases a new book.