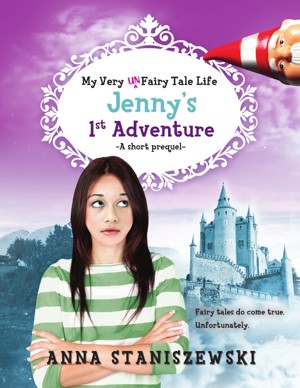 Born in Poland and raised in the United States, Anna Staniszewski grew up loving stories in both Polish and English. She was named the 2006-2007 Writer-in-Residence at the Boston Public Library and a winner of the 2009 PEN New England Susan P. Bloom Discovery Award. Currently, Anna lives outside of Boston with her husband and their adopted black Labrador, Emma.

When she’s not writing, Anna spends her time teaching, reading, and challenging unicorns to games of hopscotch. Her first novel, My Very UnFairy Tale Life, was released by Sourcebooks Jabberwocky on November 1, 2011. The sequel, My Epic Fairy Tale Fail, is scheduled for March 2013. And look for Anna’s first picture book, Dogosaurus Rex, coming from Henry Holt in Spring 2014.

I've read the first Jenny the Adventurer book and this prequel was perfect. Jenny is whisked away by Anthony the gnome for her first adventure in solving problems in the magical world. Very cute. Elementary girls will love it!

You have subscribed to alerts for Anna Staniszewski.

You have been added to Anna Staniszewski's favorite list.

You can also sign-up to receive email notifications whenever Anna Staniszewski releases a new book.