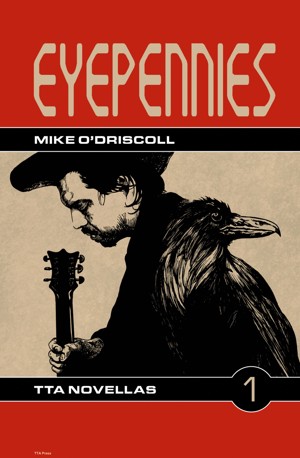 By Mike O’Driscoll
Eyepennies is a novella inspired by the music and life of Sparklehorse, aka Mark Linkous. It's the first in the new series of TTA Novellas. More
Here are some comments on Eyepennies:

“A musician emotionally scarred by a near-death experience is haunted by his past, his present and his future in this chilling, slow burn of a ghost story. Read it!” Ellen Datlow

“Mike O’Driscoll is without doubt one of our best writers. I often wish he wrote more, because when he does produce something new – such as the excellent Eyepennies – it’s truly an occasion for celebration” Tim Lebbon

“A musician struggles to come to terms with his existence following a near-death experience, in a world where reality is something elusive and the darkness is always waiting. A beautifully written, evocative novella” Alison Littlewood

“A beautiful story suffused with the entangled mysteries of pain and life, as radiant as it is dark: the best kind” Stephen Volk

"O’Driscoll delivers these emotions with a subtlety that surprises. He lulls you in and leaves you drained, as all good horror writers should. But he does this without big dramatic scenes and with a skilful underplaying – even the most horrific of scenes, that with Mark in the farmyard with a gun, is done through Mark’s eyes, and Mark cannot appreciate the true nature of what he is doing. If the rest of the novellas in this series are half as good as this, I look forward to them eagerly." Suite 101

The inspiration for Eyepennies came from a song by American singer-songwriter Mark Linkous, on the album It’s a Wonderful Life: youtube.com/watch?v=h7cXtu3-u6c.

MIKE LIVES IN SWANSEA. WHEN NOT WRITING HE WORKS with adults with mental health problems. His fiction has been published in TTA publications Black Static and its predecessor The 3rd Alternative, Interzone, and Crimewave, as well as in Fantasy & Science Fiction, Albedo One, Back Brain Recluse and a whole bunch of long since deceased small press magazines, may they rest in peace. He’s also had stories in numerous anthologies including Inferno, The Dark, Lethal Kisses, Off Limits (all edited by Ellen Datlow), Gathering the Bones (edited by Ramsey Campbell & Dennis Etchison), Darklands and Neonlit (both edited by Nicholas Royle), The Year’s Best Fantasy & Horror #17, and two volumes of Stephen Jones’ Mammoth Book of Best New Horror. His essays on David Cronenberg and David Lynch appeared in The 3rd Alternative, and his writings about all things horror, Night’s Plutonian Shore, featured until recently in Black Static. His story ‘Sounds Like’ was adapted and filmed by Brad Anderson as part of the Masters of Horror TV series. He now writes a column called Silver Bullets about television for Black Static.

You have subscribed to alerts for Mike O&rsquo;Driscoll.

You have been added to Mike O&rsquo;Driscoll's favorite list.

You can also sign-up to receive email notifications whenever Mike O&rsquo;Driscoll releases a new book.