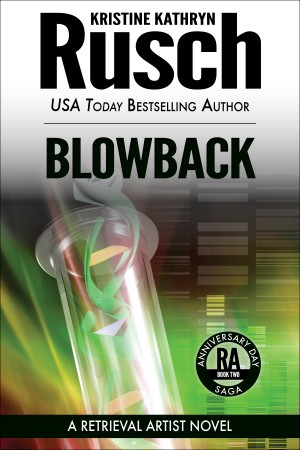 The Moon’s chief security office, Noelle DeRicci, does her best to hold the United Domes government together. But Retrieval Artist Miles Flint, dissatisfied with the investigation into the Anniversary Day events, begins an investigation of his own. He builds a coalition of shady operatives, off-the-books detectives, and his own daughter, Talia, in a race against time. A race, he quickly learns, that implicates organizations he trusts—and people he loves.

Rusch offers up a well-told mystery with interesting characters and a complex, riveting storyline that includes a healthy dose of suspense, all building toward an ending that may not be what it appears.
—RT Book Reviews

The latest Retrieval Artist science fiction thriller is an engaging investigative whodunit starring popular Miles Flint on a comeback mission. The suspenseful storyline is fast-paced and filled with twists as the hero comes out of retirement to confront his worst nightmare.
—Midwest Book Review

We have to admit that we’re a newcomer to the series, but may have to dig in to the earlier books. Blowback does stand on its own as a great read!
—Astroguyz.com

Another nice addition to the Retrieval Artist series.

Another superb book in the Retrieval Artist series.

This is the latest - at this time - of Ms. Rusch's Retrieval Artist series. It's 6 months after the Anniversary Day bombings (think 9/11), and everyone on the Moon is nervous, thinking that another attack is imminent.

But so far, nothing has happened.

Noelle DiRicci, the top security person on the Moon (and Flint's former partner in the Armstrong Police Force), also believes an attack on the Moon is imminent, but she has no facts to back that up - just a general intuitive feeling.

Meanwhile, Miles Flint, who has been helping Noelle in the investigation, is frustrated. He feels that there are too many disparate elements investigating the bombings so that nothing is getting done.

There is no central database or person to gather all the information that HAS come to light, and Miles decides to be that clearinghouse, as it were, and to use whatever means - and whoever he can find (whether on the right side of the law or not) to finally find out who targeted the Moon and why.

An absolute page turner that will have you on edge the entire time. Will the Moon escape further bombings or will some of the domes be destroyed? You'll have to read to find out!