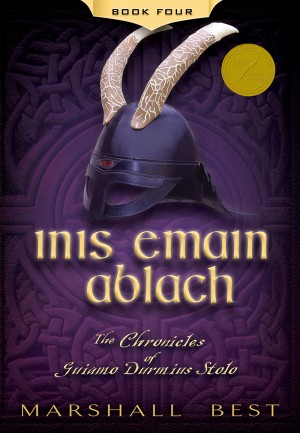 Combining legitimate legends with actual historical events, Marshall Best weaves an epic story that portrays the ancient world as it might have been, a world which the ancient historians recorded as fact; a time when gods ruled the earth and strange creatures dominated the land. It is the era of civilized conquerors exploring distant and primitive new lands. Scant recordings left to us today only touch on the fringe of the fantastic and brutal reality that existed in those distant lands of the west. Into this age, young Guiamo enters the world stage as the great game-changer, and by his hand the gods and beasts become destined to disappear into myth and legend.
Available ebook formats: epub mobi pdf lrf pdb txt html
First 20% Sample: epub mobi (Kindle) lrf more Online Reader
pdb
Price: $5.99 USD
Buy Add to Library Give as a Gift
How gifting works
Create Widget
Tags: sword and sorcery epic fantasy ancient history books for boys teen and young adult best sellers 2013 greek and roman mythology gods at war historical fantasy books
About Marshall Best

Marshall Best is an avid reader, father of six and business owner. In the past several years he has found his love of writing as well. What began as a desire to write a story for his children has evolved into a nine book series.

Marshall has done extensive research into the history behind the legends, people and places of England, Scotland and Ireland involved in his books. He loves being able to weave real people and legends into his stories making them come alive. He is definitely a writer that tends to the details often mapping out timetables, calendars, genealogies, etc. that pertain to his book to ensure that it is as realistic as possible.

Marshall also enjoys putting real life issues into his books, delving into a bit of philosophy while entertaining with orcs, dragons, magic and battles. He is someone who loves a grand adventure but makes sure it's not a shallow one.

I have just finished reading Inis Emain Ablach by Marshall Best. This is book 4 in The Chronicles of Guiamo Durmius Stolo series and I must say it has blown me away. I am trying to catch my breath before I can write this review.

The author has done an excellent job of developing a tale throughout all four books which is both action packed and full of adventure. I found myself completely absorbed into the story and became a part of the tale as an unseen extra in the story. I love when a book, much less a series, can capture me and transport me to its world.

The book was easy to follow but kept me on my toes because of all the plot twist. The entire series never slowed down and I found it hard to stop reading when I started.

Marshall Best did an excellent job of developing all his characters. They were real and easy to believe in. I found it easy to identify with each character as the story progressed. It was fun to watch as the characters developed throughout the series and become the heroes of the story.

I really liked reading Inis Emain Ablach and the entire series of The Chronicles of Guimo Durmius Stolo by Marshall Best and I highly recommend this book to all readers.

ps. It is best to read this series in order to get the full affect, but each book can stand on its own.

This book has probably been my favorite so far out of them all! I am probably getting something totally different out of this book than most people do, there are quite a few times in this book that I thought to myself “this is the creating of the world”, and a lot of this is similar to the Bible. I may be totally off base, but these are my thoughts!

Guiamo continues to be an amazing young man! He is faced with terrible hardships in this book and is caused great pain, yet he still does all he can to make the world a better place! He finds himself losing favor with the Gods and some of the people. It seems like just when there is a resemblance of peace something else happens! There is so much contention in this book!

I think Guiamo is such an honorable and loyal man! He stays true to the things he has been taught regardless of whether they are popular or not! He finds out who his true friends are and then is saddened by things that happen between him and his friends! Relationships that I thought would be life long are challenged.

Guiamo translates some ancient papers, and in so doing causes a little rift, yet he continues because he knows it’s the right thing to do! Yet another reference to scripture…if you ask me!

Guiamo finds a way to travel between his world and the world of the Gods, and it makes for some interesting encounters!

There are so many things I want to say but don’t want to spoil the book for those who haven’t read it! I may have done that already but that was not my intention!

There are a few things I am going to say that you may want to stop reading now because they MIGHT spoil a little!

Guiamo finally gets word back to his family that he is still alive, and in return is rewarded with some sweet letters from those who helped raise him. This may have been the best part of the whole book for me! I love that Guiamo gets a taste of his home and his loved ones! It was one of the sweetest moments as he sits to read the letters from his loved ones, being so thankful and relived to find out after many years that he was still alive and well! I got a little chocked up at one of the letters!

I think I said this at the beginning of my reviews, but I am going to repeat myself! I am so glad I had the chance to review these books, because they are totally out of the “norm” for me! I would have walked by them in the book store and thought the covers were awesome, but when I read what they were about, and when they took place I would have put them back on the shelf and not given them a second glance, and now I know I would have really missed out on a great series!

I cannot wait for the saga to continue! Marshall Best is a great writer! I am glad I ventured out of my “comfy” zone and was introduced to this great series!

I honestly hope that if you have this on your “to read” list that you enjoy it as much as I did, and if you don’t add it! You won’t regret it! Even if it’s out of you “norm”, it’s a great story! If you like battles, this series has plenty of them!

It’s very clean although some of the battle scene descriptions grossed me out; I consider this series very clean!

You have subscribed to alerts for Marshall Best.

You have been added to Marshall Best's favorite list.

You can also sign-up to receive email notifications whenever Marshall Best releases a new book.