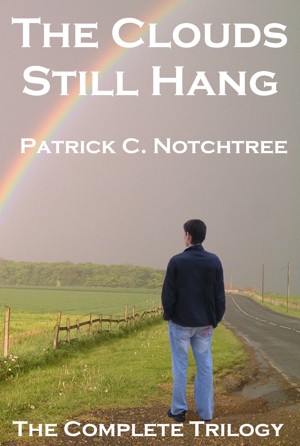 Rated 5.00/5 based on 1 review
"The Clouds Still Hang" is a trilogy based heavily on the author's life telling a story of love and loyalty, betrothal and betrayal, triumph and tragedy; novels that chart one man's attempts to rise above the legacy of a traumatic childhood.
It is a trilogy because it is written in three sequential parts, each long enough and able to stand alone; but it forms one long story. More
Limebury Books is undertaking the on-line and paperback publication of a trilogy on behalf of Patrick C Notchtree.

It is a trilogy because it is written in three sequential parts, each long enough and able to stand alone; but it forms one long story.

"The Clouds Still Hang" is a trilogy based heavily on his own life telling a story of love and loyalty, betrothal and betrayal, triumph and tragedy; novels that chart one man's attempts to rise above the legacy of a traumatic childhood.

The first book deals with Simon's childhood friendship and eventually love affair with an older boy, the second the trauma of his teenage years and early adulthood, the third his struggle to maintain equilibrium and the catastrophic consequences of his failure at one point to achieve that.

It is a fictional biography, written because it tells a strong story which raises many issues over six decades, the post war baby boomer generation who in many ways never had it so good.

His own experience is probably unique, yet will strike a chord with many others who have been through similar things, as well as those with an interest in such matters, either personal or professional, such as police and probation officers, criminologists with an interest in this field or those investigating the developing 'queer theory'.

Patrick now lives in the north of England with his wife and has his son and granddaughters nearby. Much of his life is reflected in the biographical trilogy "The Clouds Still Hang", so to repeat too many biographical details here would be something of a 'spoiler'!
This book is now also availability as an audiobook - hear me read my own story

Reviews of The Clouds Still Hang by Patrick C Notchtree

Ending his autobiography with his very first memory, of being a very small child and having a little accident outside the bathroom door, did make me smile.

I thank the author Patrick for his candour and honesty throughout this read. I was quite unaware of the story that was to unfold. His life story, which Patrick tells through his ‘avatar’ Simon, first concentrates on Simon and his friendship with another local boy, Daniel. As well as the day to day goings on in Simon’s life and the difficult relationship he was having with his father, we see the friendship with Daniel becoming an essential escape. A very close friendship was evident, the basis of an incredibly ‘Deep Love’ that was formed so early in his life and later this intensified into a relationship of a sexual nature.

The teens were ultimately torn apart by Simon's parental separation and a move up north, leaving the broken feelings of love taken, estrangement and loss. These emotions and this loss of love were to remain with him throughout his life. The story was extremely upsetting to read in places, although throughout I really felt for Simon. Other events would almost nearly destroy him! Times of deep depression, guilt, grief and regret all had their place.

There is a second love of his life; his wife Karen has played a huge part in his story. A comfort and anchor for him, she helped him cope throughout and played a very important part in his life. Even his children and later grandchildren play their steadying roles. His life seems so normal from the outside, yet there were secrets he could not share and deep feelings of isolation.

In his thirties an unimaginable situation occurred. He would be living with demons for some time. Later he would have to face those head on and pay the price.

Patrick has been meticulous in recounting his life, remembering the good, the bad and indeed the ugly! I admire him for his perseverance.

Later, much later Simon finds an acceptance of his inner turmoil in the form of a friendship, a third love, who helped him to realise and let go of his inner turbulence and he finally accepts himself and the sum of experiences that helped to make him the man he is.

Not always an easy read, but certainly a very compelling one.

(reviewed 39 days after purchase)
Victoria Maposa reviewed on Sep. 24, 2018
(no rating)
Memoirs are not really my thing. However, talking about the war got my interest. I found the book to be a bit too explicit but i know others will love that. also, i really think that the LGBT and pro LGBT community will find this book really interesting

You have subscribed to alerts for Patrick C Notchtree.

You have been added to Patrick C Notchtree's favorite list.

You can also sign-up to receive email notifications whenever Patrick C Notchtree releases a new book.