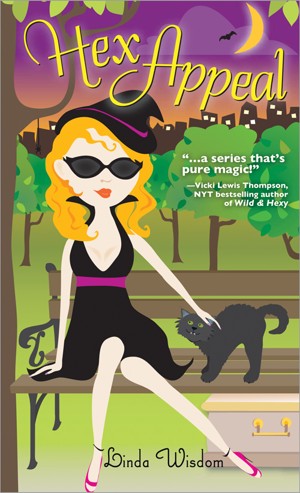 By Linda Wisdom
Feisty witch Jazz and her drop-dead gorgeous vampire cop boyfriend are back, with their relationship as stormy as ever.

Linda Wisdom was born and raised in Huntington Beach, California. She majored in Journalism in college then switched her major to Fashion Merchandising when she was told there was no future for her in fiction writing. She held a variety of positions ranging from retail sales to executive secretary in advertising and office manager for a personnel agency.

Her career began when she sold her first two novels to Silhouette Romance on her wedding anniversary in 1979. Since then she has sold more than seventy novels and one novella to four different publishers. Her books have appeared on various romance and mass market bestseller lists and nominated for a number of Romantic Times awards and Romance Writers of America Rita Award.

She lives with her husband, her spoiled rotten Chihuahua/Yorkie, and an equally spoiled parrot in Murrieta, California.

A number of Linda’s book backlist, including her Hex paranormal series, has been optioned for film and television.