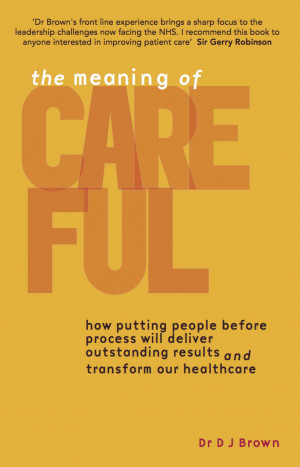 The Meaning of Careful

Dr Hamblin-Brown qualified as a doctor in the UK in 1996. Since 2005 has been a practicing Emergency Physician in the UK's National Health Service (NHS) and is a Fellow of the Royal College of Emergency Medicine in London (FRCEM). More recently, he was the Medical Director of a group of private hospitals in the UK as well as the Vice President of Medical Affairs for a Chinese hospital group.

He has for many years worked as an advisor and coach with healthcare organisations, promoting a balance of compassion and rigour to healthcare leadership.

Although he has dedicated most of his working life to the challenges of improving healthcare he has also worked, prior to medical school, for city financial institutions. For a few years, after qualifying as a doctor, he also spent time as an implementation consultant, delivering results-focused change programmes in physical industries such as manufacturing and oil-and-gas.

He endeavours to practice as a buddhist.

Reviews of The Meaning of Careful by DJ Hamblin-Brown

You have subscribed to alerts for DJ Hamblin-Brown.

You have been added to DJ Hamblin-Brown's favorite list.

You can also sign-up to receive email notifications whenever DJ Hamblin-Brown releases a new book.