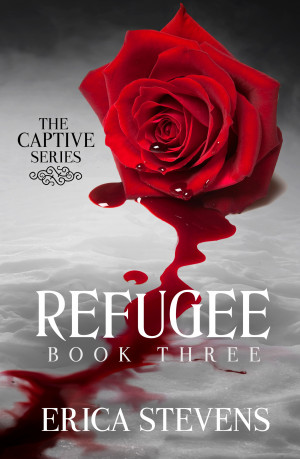 By Erica Stevens
Rated 4.88/5 based on 8 reviews
Horror stories abound about The Barrens. Aria is fearful of entering into the land she’s heard nothing but cautionary tales about, but she’s determined to help Braith locate vampires that may help them with their cause. The deeper they travel into The Barrens, the more she realizes that it won’t be the war, or even the king who will eventually tear her and Braith apart.

It will be her. More
Whispers and rumors about The Barrens, and the strange creatures lurking within, run rampant.

Determined to find the remaining vampires who stood against his father in the war, Braith knows it’s dangerous to enter the inhospitable land. It’s also their only chance of finding allies who might join the rebellion to overthrow the king.

Though he once knew the powerful vampires rumored to reside within The Barrens, he’s unsure what to expect if he succeeds in finding them. They were his enemies when he last saw them, but he'll do whatever is necessary to ensure a future for himself and Aria.

Aria’s determined to help Braith locate the vampires who could help with their cause. However, the world they uncover within The Barrens makes her realize that it won’t be war or the king who tears her and Braith apart…

It will be her.

***The Captive Series is mature YA/New Adult. This book contains some language, violence, and sexual situations. Recommended for ages sixteen and up.***

Erica Stevens is the author of the Captive Series, Coven Series, Kindred Series, Fire & Ice Series, Ravening Series, and the Survivor Chronicles. She enjoys writing young adult, new adult, romance, horror, and science fiction. She also writes adult paranormal romance and historical romance under the pen name, Brenda K. Davies. When not out with friends and family, she is at home with her husband, son, dog, cat, and horse.

She loves to speak with readers and can be found:

About the Series: The Captive

Also in Series: The Captive

Reviews of Refugee (The Captive Series Book 3) by Erica Stevens

Erica is an amazing author! Just had to say this again. Her books are really good. They are like fine wine- they get better each time and its always like a new experience :)

are you kidding me? where is the other book? I wont be able to sleep until i read that other book i have too, I'm too drawn in to wait for it.

This is a great series the best i have ever read! I cant wait much longer my interest is growing to strong.

Absolutely brilliant book, the only thing I don't like is waiting for the next one, as soon as I finish one I want to read the next one straight away! Fantastic writing.

Really enjoyed this book and this series, can't wait to see what happens in the next one

Well Done!!! You have truly outdone yourself again .. Have just finished reading book 3 and as with the other 2 books I couldn't put it down but yet again I have been left totally devastated . Please tell us that there will be a book 4 and that it will be soon.

I LOVE THESES BOOKS!!!! Can't wait until for the next one!

Thoroughly enjoyed this 3rd book in the Captive Series by Erica Stevens.

The story keeps moving forward as Braith and Arianna head towards what appeared to be an inevitable future. Unfortunately they saw that future differently, especially as the vampires surrounding them made it painfully clear to Aria that the future Braith envisioned would never come to pass.

I was on the edge of my seat from the Prologue! My heart was already breaking for these lovers and we had no idea what would happen or when. As the book went on I became concerned that it would become formulaic - Ms. Stevens had outlined what their path would be, they headed down it and then BAM! DID NOT SEE THAT COMING! And was extremely happy to be thrown off the proverbial cliff.

Can't wait for the 4th book to come out!

Absolutely amazing! Highly recommend this to everyone!
Can not wait for the 4th book - it nearly killed me waiting for this one!!!

You have subscribed to alerts for Erica Stevens.

You have been added to Erica Stevens's favorite list.

You can also sign-up to receive email notifications whenever Erica Stevens releases a new book.