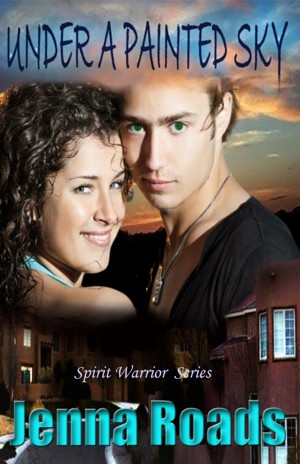 Under A Painted Sky

By Jenna Roads
Rated 4.00/5 based on 3 reviews
Paranormal Romance suitable for YA. The setting is Albuquerque, New Mexico where Logan and Isabella fall in love. She becomes prisoner to a paranormal phenomenon. Can Logan even save and rescue her in time? More
Isabella Reed is a fast-track twenty one year old from a small Florida town. She flees to the Land of Enchantment, Albuquerque, NM, where the beautiful painted skies go on forever and hold hope for a fresh start.
She meets Logan Hayes, a sexy guide who has been hired to show her all the sights of her new city. He shows her much more than that. Something Paranormal happens to Isabella that she is unaware of when touring the Petroglyphs and her life takes a downward spiral into a supernatural captivity that no one will believe except for Logan. He vows to protect her with his life after seeing for himself.
Visual Insight into this book can be found at Pinterest.
Available ebook formats: epub mobi pdf rtf lrf pdb txt html
First 20% Sample: epub mobi (Kindle) lrf more Online Reader
pdb
Price: $2.99 USD
Buy Add to Library Give as a Gift
How gifting works
Create Widget
Tags: fiction paranormal activity ghost and intrigue romance and paranormal
About Jenna Roads

Paranormal Romance Author
I am a Registered Nurse who is now devoting my time to writing fiction, reading, making scrapbooks, taking pictures, traveling and enjoying family and friends. I am a mother of two. When I'm not writing, I'm dreaming up characters for my next book. I love cotton nighties and comfortable shoes. My dream is to one day have an island of my very own where I can hold up there and write until my hearts content.

Reviews of Under A Painted Sky by Jenna Roads

I really enjoyed this author's debut novel about love and mystery in New Mexico. The way she described the scenery was mesmerizing! I can just picture the beautiful sky, see the colorful hot air balloons, and feel the warm sun on my skin. I can smell and taste the peppery food and feel the breeze while watching the vivid sunset. I can see the Native Americans selling their beautiful masterpieces on the sidewalk. This is a big part of what made the book fun to read! I want to vacation there now!

I also loved all of the adorable dates that Logan took Isabella on! Logan is every girl's dream guy. He's protective, handsome, sweet, thoughtful, and a true gentleman. He's exactly the type of guy Isabella needed after her heartbreaking divorce.

There are a few reasons I gave this 4 stars instead of 5. Parts of the book were a little too descriptive and you really notice it with "I" in first person. I also liked the relationship between Logan and Isabella so much that I wanted more conversations instead of descriptions of Isabella's feelings. The paranormal aspect of the novel was written so well that I wanted more of that too!

I'm really looking forward to seeing what these Spirit Warriors will experience next with the petroglyphs. I'm also very interested to find out more about Cheveyo's story, his past, and his culture. I hope he finds love in the Land of Enchantment, too!

“Under A Painted Sky” is the first novel in what is anticipated to be a series called “Spirit Warriors”. I believe it is also the first published novel by independent author Jenna Roads. Ms. Roads tells the story of Isabella Reed, a divorced young woman who accepts an invitation from her aunt to pursue an escape and new start in New Mexico. I don't believe it'll be much of a spoiler to say that she gets both.


Ms. Roads pacing is deceptive. My original thought was that the book is developing very slowly – until I realized I was quickly through ¾ of the text without realizing it! Perhaps it is because I don't read a lot of books that fit either the “romance” or “paranormal” category, let alone combines the two like this one does. (And they SHOULD be listed separately; they are two different aspects of the book. It's not like our protagonist falls in love with the ghost of a young Spanish conquistador or something to make it a “paranormal romance”!)

The strongest aspect of Ms. Roads' work is how her obvious love of Albuquerque pours out in her descriptions of the city and its various sites. I also loved what I saw of the city during a visit around 10 years ago, but haven't been able to back – until this week, when Ms. Roads took me by the hand and guided me to her favorite locales. Old Town, Sandia, El Pinto (perhaps my favorite restaurant in the US!), and more. I visited some of those sites, and others will have to be on my “to do” list for my next trip, whenever it is. Of course, I would ALSO like to see our young couple visit the Biological Park (Zoo, Aquarium, and Botanical Gardens) – maybe they'll do that in the next book?

First person narrative is a lot more difficult to successfully pull off than most folks – readers and writers – realize. You need to stay in character, but avoid too many verbal tics. The narrator can't reveal things that the character has no way to actually know (although this is not as much a problem if the book is told in hindsight). Ms. Roads' avoided the second trap, but did trip over the first issue on occasion. Most notable is when she lapses into a common trap of the 1st person narrative … “I” problems. “I walked in the door. I closed the door. I called for a pizza with peppers and olives. I paid the delivery guy. ...” A strong editor or courageous beta reader should be able to warn our author when these types of things show up before her next book is published.

The curmudgeon in me grumbles, “It's a work from a new author who needs an editor who'll do more than correct spelling and grammar.” But even that grouch side of my personality admits that there is a very strong base to work from. The fatherly side of me seriously wants to see her nurture and grow her storytelling abilities. After all, Ms. Roads has successfully accomplished two things that really hook me into a story: I LIKE the main characters, and the locale is important enough to the tale that it has almost become one of those characters!

One day in the not-too-distant future, successful author Jenna Roads will look back on this first work and say something like “Oh G-d, I can't believe I used to write like THAT.” In other households, there will be readers, looking at copies of this book, saying, “Dear G-d, I WISH I could write like THAT.”

DISCLOSURE: I was given a copy of this book by a friend, with the agreement that I would write an honest and unbiased review. (And that I would do so quickly!) Thanks, Tina!

To start, I want to mention that I chose to read this book after first discovering what an incredible person the author is. She truly is amazing and is so kind to others. That made me want to find out more about her and what books she has written. That is how I found Under A Painted Sky. Please support her and buy her books! She truly deserves it.

I really enjoyed reading this book. It was so descriptive in every way, it hardly seems like a work of fiction. The characters felt so real and life-like! I felt like a was reading a story of actual events, and was taking a tour of New Mexico! I personally love to travel and I seriously now want to visit NM asap because of this book. Actually, it made me want to live there, not just visit! I also liked that it was an easy read but even more than that I loved how real Isabella and Logan were when dealing with the spirit. You get to literally follow along on their journey as they fall in love, which felt very special, like you were a part of their lives.

I highly recommend this book and look forward to the next one in the series.

You have subscribed to Smashwords Alerts new release notifications for Jenna Roads.

You have been added to Jenna Roads's favorite list.

You can also sign-up to receive email notifications whenever Jenna Roads releases a new book.