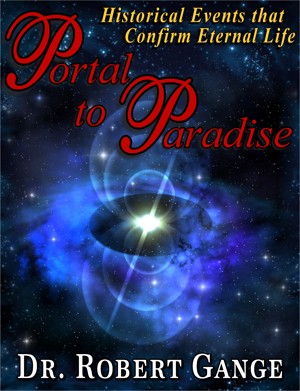 By Dr. Robert Gange
Rated 5.00/5 based on 1 review
Portal to Paradise examines historical events that show the reality of spiritual activity, trustworthiness of the Bible, and deity of Jesus Christ. Mathematical implications of accepted prophetic events unveil the statistical impossibility of Christ being other than who He claimed to be. Included are life's advent, evil's origin, the reprogramming of humans and the fate of life beyond the grave. More
Portal to Paradise opens with a discourse on the pursuit of the ideal life. The discussion broadens to embrace life's meaning and origin, and includes an overview of 9000 years of human records along with a dialogue of two world views: Theism and materialism. Ten scientific summary arguments are presented which illustrate how materialism leads to discordant consequences-- problems which are absent in Theism.

Unpredictable, reproducible and singular events are examined and applied to transition into an historical context and which lay the groundwork for a comparison of Eastern and Western systems of belief. Foundational differences between the two emerge based upon the existence or absence of evidence within the two belief systems. The need for evidence as a requirement for belief and the role it plays as a progenitor for evil is argued in depth.

The discussion of evidence leads to criteria for identifying valid historical evidence. This in turn evinces uniqueness of Bible manuscripts along with three literary tests widely used to evaluate the internal, external and bibliographic integrity of virtually any manuscript-- theological or otherwise. The manuscripts are shown to disclose prophetic events unique to Christ.

The mathematical implications of these widely accepted prophecies are applied to unveil the statistical impossibility of Christ being other than who He claimed to be. Whereas our knowledge of the ancient world rests on a relative handful of documents whose quality is at best typically poor, here the critic is embarrassed by the wealth of his material-- prime source Bible manuscripts of outstanding quality which number in the thousands!

The uniqueness of Jesus Christ is presented against 9000 years of human record, along with the role His birth played in the Y2K global crisis, and an historical overview of the things He did-- and the claims He made. Arguments are presented which leave us with the following four options: Jesus Christ was either a legend, liar, lunatic or Lord of all.

It is noted that Jesus deliberately staked everything He worked for His entire life on His single solitary claim that He would publicly return from the grave three days after being publicly put to death. This and other claims are discussed against historical facts. Also discussed is the necessity for His virgin birth, its implications for His mission, and mankind's redemption against the backdrop of the origin and role of evil in the world.

Inquiry into the Garden of Eden is made, revealing events which, for the most part have here-to-for remained undisclosed. It is shown that the fruit "eaten by Eve" cannot be literal fruit, nor can the "trees" in the garden be literal trees. Reasons are presented why this must be so. The literal meaning of these and other metaphors are then discussed along with the role of "sin" in human flesh and the path paved by Christ to eternal life.

Robert Gange is a research scientist, NJ State certified professional engineer, and an adjunct professor. He was on staff for over 25 years at the David Sarnoff Research Center in Princeton, New Jersey. His experience embraces guided missiles, laser technology, holographic memories, hybrid computer systems, image processing, cryoelectric devices and integrated electron gun technology.
Educated in five universities (Ph.D. 1978 for extensive research on the application of cryophysics to information storage and retrieval systems), he has made pioneering contributions in several scientific fields, has published numerous papers and is a member of several professional societies including the American Association for the Advancement of Science, and the New York and New Jersey academies of science.
Dr. Gange has received many corporate awards for outstanding achievement both in Science and in Engineering, has been personally honored on nine separate occasions by the National Aeronautics and Space Administration (NASA), and holds over thirty base patents with foreign filings in over twenty-three countries. 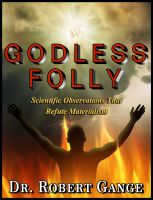 Reviews of Portal to Paradise by Dr. Robert Gange

As a 69 year old, avid reader, I have read quite a few books. My favorite books are the ones that most profoundly affect my life. "Portal to Paradise" is among the best of all the books that I have ever read!!!!! The information is USEFUL. It can have a tremendous impact upon a person's life. This author has “covered all the bases.” While you’re at it, check out the credentials of the author on page 178. His background is most impressive. It is rare to find an author of this caliber.
A most honest and sincere evaluation,
Jack Bluhm

You have subscribed to alerts for Dr. Robert Gange.

You have been added to Dr. Robert Gange's favorite list.

You can also sign-up to receive email notifications whenever Dr. Robert Gange releases a new book.