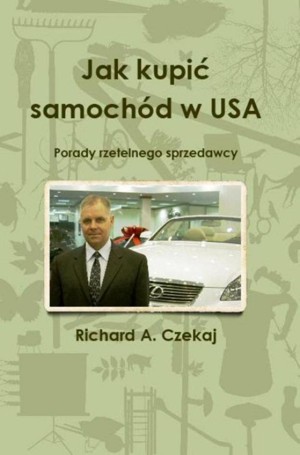 Richard A. Czekaj was born in communist Poland. He married a schoolmate, Wieslawa Senderska and entered the University of Rzeszow to study Economics. After the birth of his son, Paul, he escaped from Poland to Austria just before the declaration of Martial Law in 1981. In 1982, thanks to the help of Congressman James Sensenbrenner Jr., he moved to Milwaukee in the United States. Next, he lived and worked in Detroit, MI and in 1985 moved to Santa Barbara, CA.
There, he met Jesus Christ and became a Christian. Since then he has served Christ by sharing the Gospel and helping people wherever he went. He did missionary work in Mexico, for many years he served as a Pro-Life Counselor in Santa Barbara, for which he was arrested numerous times. There he also helped the homeless and incarcerated. He has traveled all over the United States evangelizing and doing Pro-Life work.
He moved to New York City where he started to work as a car salesman and quickly advanced from consultant to the position of sales manager at the premier Manhattan Dealership. In various periods of time he worked at six different automotive establishments where he gained considerable experience.
In the synopsis of professional and life experience he has a long list of occupations including: farm equipment operator, construction worker, machinist and machine operator, truck driver, maintenance technician, mechanical technologist, treatment plant operator, crisis pregnancy counselor, insurance agent, travel agent, teacher, sales representative, sales and leasing consultant, sales manager, translator/publisher and author.
After many years he was able to return to Poland and was reunited with his family. Right now he lives in Kielce, Poland, where in 2004 his daughter Anna Claudia was born. He periodically lives in the United States and is specializing in translation and publishing of religious and ethical articles and books in English and Polish. For many years he is an active member of Gideon’s International and has participated in the distribution of over 80,000 Bibles in the city of Kielce, mostly face to face.
As a service to Polish speaking people in the USA he wrote the book “Jak kupic samochod w USA.” Undoubtedly, the best consumer guide and handbook on how to buy a car in the Polish language. It helps to save thousands of dollars and to avoid unnecessary stress when buying a car in the United States and Canada. It is recommended in many articles published by Polish Media in America as “the best gift for every Pole in the USA at every time of year.”
Be sure to take a look at his other books which are also becoming available online, including:
- CHRZEŚCIJAŃSKI SEKRET SZCZĘŚLIWEGO ŻYCIA - Hannah Whitall Smith
- JAK KUPIĆ SAMOCHÓD W USA - Richard A. Czekaj
- ROZBIJAJĄC CIEMNOŚĆ - Joseph L. Foreman
- I ŁZY ZAMIENIĄ SIĘ W DIAMENTY - Rosemarie Claussen
- GDZIE BYŁAM? TYLKO U DRZWI? - Rosemarie Claussen i Derek Gitsham
- PSYCHOPAPLANINA Nieskuteczność nowoczesnej psychologii i jej biblijna alternatywa - Richard Ganz
- TOBIE, NAJWYŻSZY Medytacje biblijne na każdy dzień roku - Oswald Chambers
- ISLAM BEZ ZASŁONY Spojrzenie od wewnątrz na muzułmańskie życie i wierzenia

Learn more about Richard A. Czekaj

You have subscribed to alerts for Richard A. Czekaj.

You have been added to Richard A. Czekaj's favorite list.

You can also sign-up to receive email notifications whenever Richard A. Czekaj releases a new book.