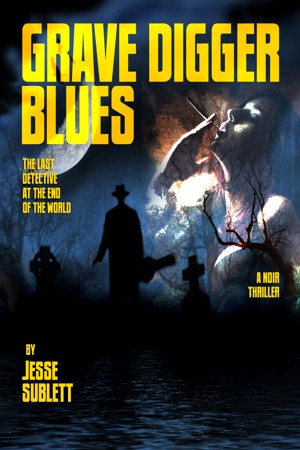 This noir is set in the last weeks before the end of the world. Hank Zzybnx, damaged war vet turned private eye, a highly-paid killer-for-hire, tracks down the ghosts of his troubled past as the urban jungle descends into chaos. Alternating chapters follow a parallel protagonist, The Blues Cat, doomed jazz musician, magnet for deranged fans, shadowed by thugs at every seedy dive he plays. More
Crime fiction author and musician Jesse Sublett has been compared to Tom Waits, James Ellroy, Otis Rush, Michael Connelly and Denis Johnson. Not surprisingly, then, his new ebook, Grave Digger Blues, is a blast of surreal, post-apocalyptic noir, laced with blues poetry and actual songs and poems, the hardest of the hardboiled, the darkest of all noir fiction around today.

The novel is set during the last weeks of the world, boom times for two-legged and four-legged predators alike. Dual protagonists drive the narrative--The Blues Cat, an itinerant, doomed jazz musician, and Hank Zzybnx, a private detective haunted by the benevolent ghost of Marilyn Monroe, fragmented memories of the war in Murderstan, and a grifter mother who hated him before he was born.

It's a dangerous and strange world, but shot through with bizarre beauty and dreamlike weirdness. Grizzly bears and alligators have invaded the cities, walking catfish prowl the exurbs.

The best bar in town is the Morgue, so-named because its previous incarnation was the cold storage of the dead; now its industrial sized refrigerator serves an even more noble purpose: sweet relief for the last survivors of the rotting Republic.

After the Republican coup, when the wacked out right-wingers blew up the White House, the federal government was replaced by a corporate board of directors, but some of the plotters have fallen on hard times. Dick Cheney is a drag queen... Newt Gingrich is a security guard at Wal-Mart who moonlights with a circus strangling puppies, but the big attraction at the sideshow is a Reagan-faced monkey who quotes lines from Reagan's most famous speeches. Thus the chapter titled "Morning in America."

Author, musician and artist, Jesse Sublett has been a force in the music and culture scene in Austin, Texas since the late 1970s, when his band, the Skunks, were the vanguard of the new music scene there. Best known for his crime fiction series of Martin Fender novels, Jesse has also received high praise for his memoir, "Never the Same Again: A Rock n' Roll Gothic," with its riveting account of his life as a struggling musician, cancer survivor, and the murder of his girlfriend by a serial killer. Jesse also does ghost writing and has written extensively for nonfiction television.

You have subscribed to alerts for Jesse Sublett III.

You have been added to Jesse Sublett III's favorite list.

You can also sign-up to receive email notifications whenever Jesse Sublett III releases a new book.