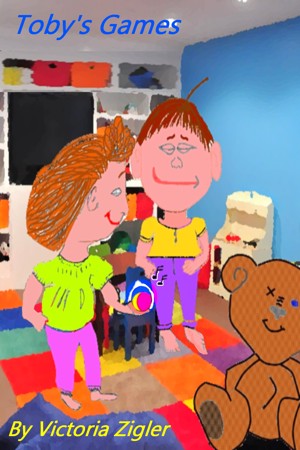 This is the fourth book in the “Toby’s Tales” series.

Books in the series:

My name is Victoria, but most of my friends and family call me Tori. Feel free to do the same.

Born in the shadow of the black mountains in Wales, I now live by the sea in the south-east of England, with my husband, Kelly, a chinchilla named Mollie, a West Highland White Terrier named Lilie, a Cavapoo named Logan, and a Hermann's Tortoise named Artemis.

Having battled with glaucoma since birth, I now find myself completely blind. But I haven’t let that stop me from chasing the dream I've had since I was a young child: the dream of becoming a published author. Though it's been said many times by many authors, I've loved to read and write since I learned how, and always wanted to get my work published. Finally, in 2012, I made that dream come true by self-publishing the first of my books as an eBook via Smashwords. Several more titles have been published since, with paperbacks and audio books also being made available. So now I’m a published author of several poetry collections, as well as a long list of children’s stories.

I’m just as happy exercising the logical side of my brain as the creative side of it, so would describe myself as a combination of Hermione Granger and Luna Lovegood from the Harry Potter books: Hermione’s thirst for knowledge and love of books, combined with Luna’s wandering mind and alternative way of looking at the world. A couple of people have agreed with that description of me, so I feel I'm justified in using it, and hope J K Rowling doesn't mind.

When I’m not lost in my own world, you’re most likely to find me either reading, writing, or attempting to keep my eMails from piling up. If I’m not doing any of those things, chances are I’m spending time with my hubby and PetKids. Either that, or taking some time to explore some of the many other interests that randomly capture my attention from time to time.

I love everything to do with animals and nature. Though I'd rather not get too close to spiders and other creepy crawly things. That love of animals was a huge factor in my choice to become first a vegetarian, and then a vegan, though there were other things that influenced my decision too.

About the Series: Toby's Tales

The "Toby's Tales" series follows Toby as he learns to adjust after losing his sight. These books are designed to show children – and adults too – the struggles and challenges faced by people who are blind, or who are adjusting to sight loss, while also being useful tools to educate those close to someone who is blind or adjusting to sight loss.

This is a touching short story - its magical how Toby's family all try to adapt to how things are for Toby after he becomes blind. One feels a special closeness to him and his sweet little sister.

Wow another wonderfull little story, and a pleasure to read , well done xx