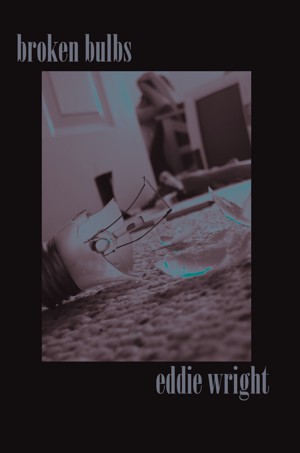 Praise for Broken Bulbs:
“Broken Bulbs is a brilliant and stunningly original work, by far the best novel I read in 2008.”
- Alternative Reel

“One of THE best books I read all year, including the mainstream stuff. An existentialist’s dream, the author has dug in deep and laid bare the raw emotion so candidly that we can actually feel the futility, the desperation, and the humour.”
- POD People

…as authentic as they come, experimental without trying to be intentionally obscure, dark without making you doubt humanity, smart and energetic. In short, it’s great writing.”

“it’s about obsession, self-negation, love, even God, making Broken Bulbs an entirely unique take on a subject. It’s a science fictional, hard-boiled, poetic vision of drug addiction and hamsters (read it!) A great addition to a genre that has never existed before.”
- Henry Baum, author of The American Book of the Dead

“It could be a portrayal of addiction. It could be commentary on our doped-up society, that pops a pill to fix something that isn't even broken. A love story gone wrong - or right. It could be a plea to have compassion for all living things, and to cherish our natural world. It could be one big lecture, chastising bad parents. And really? It could all just be a bunch of shit, a big joke of nothing. I don't know, man. I can't tell you. The only thing I know for sure? I can't forget it. ”
- K.I. Hope, Author of hector

“Eddie Wright is an artist with a vivid imagination, a weird, Pythonesque sense of humor and a daring attitude.”
- Gint Aras, Author of, Finding the Moon in Sugar

“…disturbing and humorous, horrific and eccentric… a fine specimen of what insanely inventive gems would be overlooked were it not for the fine world of independent publishing.”
- Bookish Mom

“…this slim volume is the bastard child of Memento and William S Burroughs, absolutely not for the faint of heart nor for anyone seeking a nice, simple beach read.”
- Chicago Center for Literature and Photography

“…the absolute perfect spot-on portrait of the mind of an addict.”

“The first chapter alone is a nauseating churn of short choppy staccato sentences, random thoughts and actions, that read like beat poetry at a slam.” “The whole thing is filled with crazy quips and one liners worthy of a high lighter so you can memorize and use them later.”
- The LL Book Review

“…every single word and phrase was methodically placed to perfection to share Frank’s bizarre and desperate world. It’s a bit poetic, sometimes disturbing and challenging as each carefully placed phrase fits into the puzzle of Broken Bulbs. On a bookshelf, I’d sandwich it between Sartre and Denis Johnson.”
- Holly Christine, author of The Nine Lives of Clemenza

“It is dark, twisted, gory, cringe-worthy, but most of all, fascinating. It is, I think, a story that speaks to anyone struggling to make something of themselves.”
- Quills and Zebras

"...a weird, trippy, a fever dream of fiction, and its author is one to watch.”
- Todd Keisling, author of A Life Transparent

Eddie Wright is a writer of things.

He is the author of A BROKEN EVERYTHING and BROKEN BULBS. He is also the creator of the graphic novel Tyranny of the Muse, writer of Lake Imago, and contributor to BOOM!&#39;s Regular Show comic series.

Note: a slightly longer version of this review originally appeared in my blog, Liquid Ink.
--------
Young students of literature are often stunned to realize just how much anti-realist, absurdist and frivolous writing has been penned over the centuries, stuff that fans of mysteries and romances might consider unreadable. I could begin listing the famous names...Gertrude Stein, William Burroughs, Jorge Luis Borges, Samuel Beckett...just a few more...Kathy Acker, John Barth, Ben Marcus, Aleksander Kluge, Donald Barthelme, Christian Bök, etc. If you don’t know any of these writers, or if you could never see yourself buying a book outside Walgreen’s, there’s no reason for you to read Eddie Wright’s Broken Bulbs. If, however, you're looking for an adventure, then Eddie Wright’s debut is for you.

This isn't to say that you’re going to love the book the way you loved your bedtime stories. One of the things I admire about Bulbs is how it avoids asking for readers’ love. If Wright’s short novella is asking anything at all, it’s for readers to wonder why the hell they’re reading--why should anybody read anything? This self-deprecating irony is not merely a pomo trick. It gets to the heart of the protagonist’s main problem: in order to create meaning, Frank Fisher’s identity depends on exterior stimuli, primarily from a muse named Bonnie. Addicted to her, Frank has trouble feeling and finding love.

The main mission we discover among Fisher’s many psychological problems is that he wants to complete a screenplay about an alter-ego named Dusty. Dusty’s relationships are all strained; they induce guilt, doubt and confusion. Without giving away a spoiler, Broken Bulbs deals partially with the death of a pet, an animal who is later reincarnated by Fisher’s screenplay to play a darkly-comic, deviously absurd role, easily the most unexpected and charming treat in Wright’s book. The screenplay fades out after this pet’s final act, and Wright’s readers are left with a climax-of-sorts. But then "Broken Bulbs" continues as Fisher seeks more inspiration--he cannot stop his desire to write. Bonnie will continue feeding him inspiration, it seems, until his writing kills him.

Other reviewers have commented on Broken Bulbs as a portrait of an addict. The book is that, complete with all the necessary psychological investigation; as a muse of inspiration, Bonnie is a “dealer” who can manipulate Fisher, even control his thoughts. I feel, however, that it’s a superficial reading to consider Broken Bulbs merely a book about the chaos of addiction. Wright’s greatest triumph is the construction of an allegory about a writer’s conflict: he must write even when his writing is mostly erasing him, simply accelerating his march toward self-destruction. Frank Fisher is aware of this...there is no hint of an audience for his writing. But at the moment when he runs out of ideas, a blessed opportunity to step away and get on with something more practical, he panics and descends into chaos, desperate for the next idea that will send him to attack the keyboard. Why the hell is he doing it? He’s sick and can’t help it.

Eddie Wright is an artist with a vivid imagination, a weird, Pythonesque sense of humor and a daring attitude. Broken Bulbs did not present him with as many technical challenges as, say, "Lost in the Funhouse" presented Barth. Nevertheless, Bulbs was not an easy book to write. Its aesthetic is sterile, often utterly colorless, while its rhythm effectively recalls the repetitive gestures of a lunatic. The book does allude to a number of GenY pop-philosophy films, primarily Donnie Darko, but it does not seem to be the product of a thorough study of literature, something that left me a bit disappointed. At the heart of Broken Bulbs, however, lies a compassion and warmth that glows past the tight chaos and gray haze of Fisher’s mania. It’s that warmth and glow that helps us answer why people write and, more importantly, why we read. Yes, sometimes we just want to pass the time on the beach. But other times we need to wonder why we’re going to the beach if our only goal is to pass away the time.

(reviewed the day of purchase)
Tom Lichtenberg reviewed on Sep. 20, 2010

This is one of the best books I've found on Smashwords so far. The Moxie Mezcal review below sums it up pretty well. It's hysterical and wretched at the same time. I want to throw in a bunch of quotes here from the book but I wouldn't know when to stop. There's just so much good stuff.

Broken Bulbs is either about a junkie trying to write a screenplay or a writer who thinks he needs to fix in order to create. Either way, it's a compelling meditation about the intersection of art and addiction and the way that both are essentially born of our need to feel like our life has meaning. Narratively, the book plays out like a bad trip, existing in a world that's all blood and puke and festering wounds and desperation. But often it's the worst trips that are the most revealing, showing us the parts of our souls that are ugly and petty, tearing down the barriers between the stories we tell ourselves and the truths we try to evade. It's gritty, it's ugly, it's brazenly experimental in both form and style, it's allegorical, it's satirical, it's as darkly engrossing as staring at someone's disfiguring wounds, and yet it also manages to be profoundly cathartic.

After learning about Eddie Wright and Broken Bulbs on Backwordbooks.com. I immediately purchased his work. I’m always drawn to the drug tales, but Broken Bulbs is different. I realized immediately that, while the work is short, every single word and phrase was methodically placed to perfection to share Frank’s bizarre and desperate world. It’s a bit poetic, sometimes disturbing and challenging as each carefully placed phrase fits into the puzzle of Broken Bulbs. On a bookshelf, I’d sandwich it between Sartre and Denis Johnson.

You have subscribed to alerts for Eddie Wright.

You have been added to Eddie Wright's favorite list.

You can also sign-up to receive email notifications whenever Eddie Wright releases a new book.