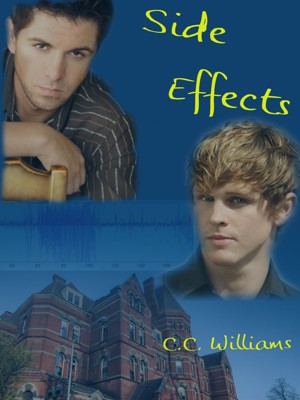 One night shy Max Caulfield's fantasy guy presents himself on a silver platter, and Max eats him up with a spoon.

Cute and super intelligent, Damien Mackenzie is right down Max's alley. He's thrilled when Max accepts his offer to hook up, then confused when Max rebuffs him afterward.

When their psychology research project takes an unexpected turn, Max is forced to confront his feelings. More
Max Caulfield is secretly attracted to his best friend, Damien. One night Max's fantasy is presented to him on a silver platter and he eats it up with a spoon, only to be thrown for a loop when Damien confesses his love.

Cute and super intelligent, Damien Mackenzie is right down Max's alley and has been in love with him ever since they won the school math contest last year. He's thrilled when Max accepts his offer to hook up, then confused when Max rebuffs him afterward.

After moving several times about the country and Europe, C.C. Williams currently resides in the Southwestern United States with his partner JT. When not critiquing cooking or dance show contestants, he is at work on several writing projects.

He invites you to find out more at ccwilliamsonline.com or to join him on Facebook at facebook.com/c.c.williams.author, on Goodreads at goodreads.com/ccwilliams or on GLBT Bookshelf at bookworld.editme.com/ccwilliams

Reviews of Side Effects by C.C. Williams

You have subscribed to alerts for C.C. Williams.

You have been added to C.C. Williams's favorite list.

You can also sign-up to receive email notifications whenever C.C. Williams releases a new book.