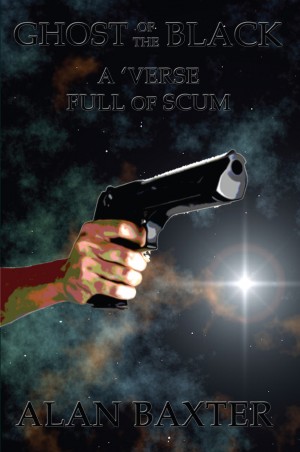 Ghost Of The Black: A 'Verse Full Of Scum

Rated 4.00/5 based on 6 reviews
Ghost is possibly the best bounty hunter in the universe and he always gets the job done. At least, that's the reputation that he rides on. When the DAP employ him to track down and capture a rogue Magicker that's running across the galaxy killing anyone that gets in his way, Ghost realises that this is a job that could cost him his reputation. It's also a job that could cost him his sanity.
Available ebook formats: epub mobi pdf rtf lrf pdb txt html
First 30% Sample: epub mobi (Kindle) lrf Online Reader
Price: $2.99 USD
Buy Add to Library Give as a Gift
How gifting works
Create Widget
Tags: thriller mystery action fantasy supernatural science fiction noir alien novella gritty
About Alan Baxter

Reviews of Ghost Of The Black: A 'Verse Full Of Scum by Alan Baxter

Read this novella in one day and, despite some flaws, I found it a captivating read.

I have some issues with the description of FTL space travel used in the story and the lack of resolution of one aspect of the story.

The first problem could have been fixed by setting the story all on one planet and having the travelling involved in the story constrained by normal distances and the availability of more normal modes of transportation and communication rather than having it occur over unbelievable numbers of lightyears. Even the use of jump-drive technology would have been better than how travel between the stars is described here.

To my mind the second issue is more problematical. At one point the protagonist is given aid from an unexpected source, a religious group acting on a prophecy. To my mind this was one of the most intriguing aspects of the story. But, the prophecy's part in the story is never explained.

Okay, but don't start thinking that this story is not a science fiction story. It is. At the end of the tale the author presents the reader and the world(s) of the story with a revelation in fine sci-fi tradition. But, in keeping with the character of his protagonist, we are just left to wonder what might happen as the main character collects his fee and simply leaves the scene as quickly as he can.

It's a good yarn as a mystery thriller, but I wouldn't recommend it for those who like their science fiction hard. As I do like my science fiction hard, and could see how the story could have been improved, I've given it three stars, but it probably deserves an extra half star.

The pacing was good, and the story was enjoyable. I liked how the author gave us just enough information to understand the story universe without going into too much exposition. I am looking forward to the author's other books.

I really liked how the futuristic setting took a back seat to the almost crime-noir story and character. It was like Micky Spillaine meets Bladerunner. I could actually go back and read some old hard-boiled detective fiction after this, but I'd have a feeling that this would still be more fun!

A couple of places the author slipped into present tense language in the narration, and it took me a little out of the story, but only a little. This was a fun read and I highly recommend it to anyone looking for such.

I downloaded A 'Verse Full of Scum here and read it over a couple of days.

I love sci-fi stories and the author's down to earth, irreverent, cynical style of writing made for a very entertaining read. The book was pacy and left me wanting to read more, so I've downloaded the author's other 2 books, available here at Smashwords.

I want to know more about Magickers, DEMs, DAP and Ghost's adventures as a bounty hunter, travelling the 'Verse in various ships.

Well done, Alan, and thank you! I'm waiting impatiently for a sequel.

I found this one a bit grungy and almost like I’d imagine the punk sci fi genre (if I read more in that area).

So a little bit different from most sci fi but not in a bad way. Excellent pacing, I think I read it in 1 or 1.5 sittings which rarely happens.

I liked the 2-3 ludicrous moments in the story, esp. the ones that satirise religious movements.

I think the ending wasn’t as sharp as the rest of the story but still a very good worthwhile read.

(Affiliation: I know the author in "real/offline" life)

Alan Baxter is fast becoming my favourite fiction writer. I say fiction as you know the world’s he create are not real but deep down, I wish they were – they feel total real and come alive as you read. Like alot of the other reviewers of his work, I’ve found myself not wanting to stop reading once I start and end up reading the entire story in one or two sittings only to be annoyed at myself when it ends for doing so and not taking more time to live in Alan’s worlds – However, its the pure pace of Alan’s writing that keeps those pages flying and I found that its not really up to me hehe

Verse Full Of Scum is a another such Baxter effort that’s set on hyperdrive. It could easily be expanded into a series of books that explore Ghost’s backstory, futurestory and the world he inhabits generally, but also holds up really well as a quick glimpse into that world.

As much as Ghost is a mystique, I identified with him straight away and his cause, Im still not sure if he is a god guy, bad guy or indifferent but it hardly matters – What does is the action, of which there is plenty, the identifiable characters, some you are more than happy for Ghost to dispose of and the Verse Full Of Scum that is contained within. At times it’s Blade Runner meets Han Solo’s job before he met Luke mixed with stuff you think Boba Fett gets up to when he’s not on camera and at other times completely new ideas and scenarios which is a testament to Alan’s creativity.

This is the 3rd outing I’ve read from Alan and each time the ante has been upped significantly, I can’t wait to see what his characters get up to next!