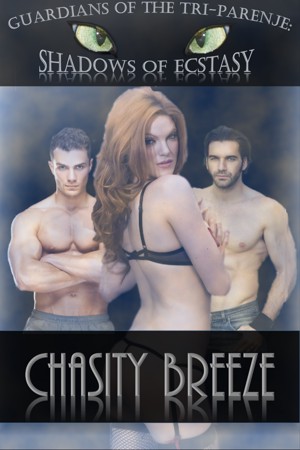 Guardians of the Tri-Parenje: Shadows of Ecstasy

Rated 4.50/5 based on 2 reviews
Sloan Dasani was a witness to a brutal murder by two very large animals that resembled some sort of enormous cats. After sensing her presence, the beasts go after her. She's rescued just in time and taken to a safe place where she is guarded by two of the hottest guys she'd ever seen. She's drawn to both of them and soon finds herself thrown in the middle of a very hot and steamy menage a trois. More
After a long stressful day at work, Sloane Dasani takes a run on the path in the park close to her home under the safe light of a full moon. But her day’s about to get a lot worse. As she runs along the path beside the woods, she hears screaming and, against her better judgment, she covertly sneaks through the trees to investigate. What she finds she's not sure she is seeing right. Two enormous cats were tearing three young men to shreds. Sloan was terrified at the sight of blood covering the ground and flying in the air. To her dismay, the large beasts catch her scent and move in her direction. She runs through the woods, trying to make it to safety, when she trips over a fallen branch. Before blacking out, she faintly hears a woman telling someone to take care of the others, that she could handle her.

Kade O'Connell and Lincoln Merrick, protectors of the existence of their kind...Panthera shape shifters, receive a call for a new assignment; to protect a witness from Karan, the alpha cat of the evil Thunder clan. To them, it's just another day at the office until they meet the redheaded beauty they are to protect. Sloan Dasani is the most intriguingly beautiful woman they have ever seen and she has some sort of hold on both Kade and Linc. Neither of them understands the magnetic pull she has on them and they can’t stop thinking about getting her into their bed, even if they have to share her.

When Sloan snaps out of her state of shock, she finds herself in a cabin hidden deep in the woods with two of the hottest guys she’s ever seen. She feels some sort of energy pulling her to them and things get hot and steamy when she finds that they want her as much as she wants them. The incident in the woods almost forgotten in the heat of the moment, Sloan submits herself; heart, body and soul to these two hunks. Their passion spirals out of control and Sloan is happy and content in her new euphoria.

But, an unknown danger lurks in the woods. A danger more powerful than Kade and Linc can handle on their own. They soon learn that their raving beauty is their "tri par", their shared mate. Not only is she bonded to them for life, but, unknown to her, she has some sort of power that hasn't yet emerged.

A visit to the clan Sage, an oracle, explains that Sloan is a key factor in a prophecy from long ago. She's the beginning of the coming of the Order of the Tri-Parenje, more commonly known as the Tri-Par. What they learn from the Sage is that they must complete the "Tri-Par" to initiate the Commencement of the Order by committing themselves to each other heart, body and soul...for all eternity.

Sloan has to make the decision to stay and begin the new order freely. But, she's unsure of what she wants. She wants Kade and Linc, but she must sacrifice her old life for the new. And, to be part of a coming war? She's no soldier and is against war altogether.

I, Chasity Breeze, am what most people would call outgoing and friendly. A social butterfly? Not really, but I do love to collect friends of all kinds. At the same time, I do like my privacy and a lot of it. In the normal world, people see me as a sweet, innocent and never naughty little house wife and mother. But, people who really know me know better.
I am married to the most wonderful and sexiest man alive. Brock and I have been married a few years, but we don’t like to count them. Counting just makes you feel old. We like to think we’re still somewhat close to newlyweds. Dating is one of our favorite things to share. Brock never ceases to amaze me with romantic surprises and secret interludes.
We live just West of Fort Worth in Texas, cattle country. We are excited about our future and many more wonderful, but naughty, years together. Brock and I share a love for erotic books and we have our favorite authors to thank for inspiring me to write about our own adventures. Brock is my strong foundation and keeps me going in the right direction, which is a full time job for him. With him by my side, I feel I can do anything.
I started my writing adventure in October, 2012. My writing is in its infancy and I hope to improve it with time. My love for reading has always had me dreaming of becoming a writer, so, here I am…I’ve written my first short story and working on another.
When I’m not diving deep into writing a book, I am a domestic goddess and the best mom in the world, or so I’ve been told. I love to be with my family, whether it be going on a fun-filled vacation, or just sitting at home, all of us curled on the couch watching movies. I love to be outside in the fresh air, so I sometimes grab my laptop and head somewhere outdoors to work on a book, or I just take my dog for a stroll in the park or down the main street in our small hick Texas town.
“Swingers” is intended to be a series of adventures that Brock and I share with others. However, I will be writing about fictional adventures as well. You’ll just have to guess which ones are fiction and which ones are true life stories. I do hope you enjoyed this book and will read more from me.
Remember…a good book can put a smile on your face. A great book can change your outlook on life.

Reviews of Guardians of the Tri-Parenje: Shadows of Ecstasy by Chasity Breeze

Guardians of the Tri-Parenje: Shadows of Ecstasy, by Chastity Breeze, introduces highly charged world of the Panthera shape shifters.

Sloane Dasani goes for a run later than usual one night and rather than her normal, uneventful stress release routine, she runs headlong into danger. She witnesses rogue shifters committing murder and is placed into protective custody.

That’s where she meets Kade and Linc. The two sexy shifters are assigned to keep her safe. The develop an immediate, instinctual attraction and it doesn’t take long for them to realize that they are experiencing Tri-Parenje.

The Tri-Parenje is a coupling, or lifetime mating, between a human female and two male Panthera shifters. As they introduce Sloane to their world, the also awaken in her sexual desires that had previously lain dormant.

Props to Chastity for creating an interesting and complex world. We barely scratched the surface of their complicated hierarchy and rivalry with another clan, so another book in the series better be on the way.

The characters are hot and feed every alpha male fantasy. Chastity’s writing is crisp and clean. Y’all know what a stickler I am for good editing and I didn’t find a single typo. Two thumbs up on the editing.

My favorite part of the story was Chastity’s fearless use of language. She didn’t tiptoe around taboo subjects, but rather grabbed them and owned the situation. Great exploration of human sexuality.

There were a few unresolved story lines that I am left questioning, but they definitely won’t keep you from enjoying the book. This is a novella length work and the world Chastity has created is almost too big for the length. I'd love to see her expand their world into a full-length novel and give the nuance of the story more room to play.

If you’re looking for a good urban fantasy with an unrepentant approach to sex, this book is for you.

Loved it! A HOT and exciting read. It follows the adventures of Sloan after she has been rescued by two hot guys. Sloan starts off with a pretty mundane boring life, but she is soon drawn into an exciting and sometimes dangerous world in which she knows nothing about. She does have two really hot guys to guide her through which is always helpful – lucky girl.
The plot takes unexpected twists and turns as the book draws you in to a magical and exhilarating world with a touch of mystery.
As well as being hot the sex scenes are suspenseful and well written. Unlike a lot of erotica, the characters are life like and well rounded. I won’t give too much away, but I really liked the ending.
This is a great read and I’m looking forward to the next one coming out.

You have subscribed to alerts for Chasity Breeze.

You have been added to Chasity Breeze's favorite list.

You can also sign-up to receive email notifications whenever Chasity Breeze releases a new book.