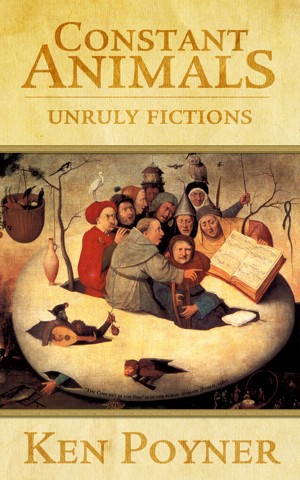 Ken Poyner has published more than 200 stories and 1200 poems in more than 200 journals and magazines, both print and web based. His books include "Cordwood" (poetry), 1985; "Sciences, Social" (poetry), 1995; "Constant Animals" (fictions), 2013; "The Book of Robot"; (poetry), 2016; "Victims of a Failed Civics"; (poetry), 2016; "Avenging Cartography"; (fictions), 2017; "The Revenge of the House Hurlers", 2018. He has taught creative writing on a Poets in the schools Virginia teaching fellowship; and given readings, or taught seminars, at Bucknel University, George Washington University, the Bethesda Writers Center, and elsewhere. He has been nominated for multiple Pushcart prizes, multiple Rhysling and Dwarf Stars awards, the Sidewise award, and several Best of the Net award. His work appears in a number of contemporary anthologies. He is known for his surreal and Irreal topics and methods.

A refreshing collection of short (micro?) fiction. So many funhouse mirror insights into relationships and human psych, each masterfully constructed with crisp language and fresh metaphors. By the time I finished reading it, I was a little dizzy. And who said literature was dead? "Tell the truth, but tell it slant." Highly recommended. Thanks for the fun read, Ken!

You have subscribed to alerts for Ken Poyner.

You have been added to Ken Poyner's favorite list.

You can also sign-up to receive email notifications whenever Ken Poyner releases a new book.