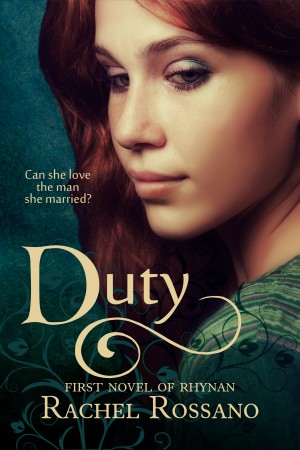 Brielle Solarius struggles to keep her village from starvation under the new Lord Wisten, her cousin. The men rode off to war and never returned. The remaining women and children face a dire winter if they do not find a solution soon. When she learns her cousin sold her into marriage to save his life, she isn’t surprised. However, she is taken aback by Lord Irvaine’s unpolished ways. Was this man a noble or a foot soldier?

Bound by the words of their vows, they face a rough future. They must forge a marriage while battling betrayal, accusations of treason, and villains from the past. Survival depends on their precarious trust in each other. Failure could mean death.

I have loved the written word from the moment my mother first sat down to read me a story. A well woven story is a joy to read and leaves the reader with a sense of completion, yet wanting more. That is what I am striving for in my work.

I am a happily married mother with young children. Currently I spend my days happily chasing little ones. Writing and editing fit in the spaces but are never far from my thoughts.

About the Series: Novels of Rhynan

Romance novels set in the nation of Rhynan, a fantasy nation similar to medieval England.

Also in Series: Novels of Rhynan

I first read Rachel Rossano's writing when I won her short story Exchange on goodreads and reviewed it. Since then I've followed her blog and read snippets of her subsequent releases.
By the time Duty came out I was familiar with her style of writing and world building.
In an alternate medieval world, in the land of Rhynan, a war has come to end and a new king is sitting on the throne. He rewards his men with title and land, and one of them, now the new Earl of Irvaine, he gives the task of securing the eastern border land by settling his soldiers in the village of Wisenvale and taking wives from the widows and women of marriageable age.
One of these women is Brielle Solaris. She was the daughter of the late nobleman who was lord of this village, but now lives in relative obscurity because the land has passed on to her careless and selfish cousin, Orwin.
When Lord Irvaine begins the process of settling his men into domesticity in her village, they cross words. But then Lord Irvaine reveals that her own fate has already been sealed by her cousin who, in a show of loyalty to the king, has given her hand and his properties to Lord Irvaine.
Brielle's life changes from worrying about feeding her village for one more season to worrying about traitors and politics and the affection of a husband who is a stranger and yet becoming quickly the most familiar and steady thing in her world.

I'm very fond of the marriage of convenience trope. Imagine strangers suddenly forced to share lives, needing to trust each other, trying to be friends, not really expecting more. Put them in the midst of turmoil where they have to show a united front to the world outside. They hardly know each other! So it's a quiet fight against time as they try to learn and take measure of each other's characters. Because a weak partnership could be used against them. And in that time if they suddenly find that what they thought was the worst sort of travesty had actually become the best source of comfort and support? That would make an awesome romance! =D

So Brielle and Tomas, Lord Irvaine, travel to his new holdings and they begin the process of learning and trusting each other. The men in her village, most of who were now dead, had fought on the other side of the war. Distrust was natural. Brielle has only ever received kindness from her father and now finds herself expecting Tomas to show the darker side of his nature every time she speaks out or argues with him. But unexpectedly, he understands what she is feeling, he is kind and sweet, and even though Brielle has not quite wrapped her head around being married to a stranger, Tomas is already thinking that maybe agreeing to this had not been one of his worst ideas.

But as they grow closer, a rebellion led by Orwin and supported by the baron robbers of the east rears its head. Unexpected responsibility falls on Brielle's shoulders when in Tomas's absence she is faced with sedition in their new holdings. Just when they thought war had finally ended, a new one begins to brew.

I think what I enjoyed best about this book was the care Rossano took in giving us a heroine who took tough decisions and stood by her word, but was also ordinary in a relate-able way. She had been trained in wielding a sword by her father, but in no way was she competent enough to fight a trained, battle-hardened soldier. She wasn't used to riding for long stretches of time and so when she suddenly had to spend days on a horse, she didn't magically get used to it. When towards the end she faced a charge of treason and knew that she could hang, she doubted Tomas's assurance that everything would be alright because despite her feelings for him, she knew he wasn't infallible and her trust in him didn't blind her to that.

If I have any complains at all, it has to do with a few mild anachronisms like the use of the words "noodles" and "hi" in a middle ages setting. =)

Otherwise, this is a sweet love story set in the background of a king establishing a new regime. I thought it was pretty well told and I especially liked the idea that the king now on throne wasn't necessarily wiser or better than the previous one, and under pressure could become just as paranoid as the ruler he just deposed. The ending was believable.

Duty is a story that consumed me from the get go. I liked a story when two people have to marry and don't necessarily like each other. Brielle and Tomas have great chemistry and both seem to be levelheaded. I found that Brielle is a strong leading lady and has her wits about her. Tomas is a soldier who has many battle wounds yet is tender and caring with Brielle. I felt like Tomas and Brielle were equally matched and had to learn to trust one another. I felt Ms. Rossano did a impressive job with Tomas's character flaws and all. I liked him a lot. I really like when the character seem real and they felt that way to me in Duty. I kinda felt the story was a little rushed. I would have enjoyed a little more foundation for Tomas and Brielle's relationship before they were separated. This story has a lot of movement in a short amount of time. It would have been nice to be in one location longer than a night. That being said I still found Duty to be a beautifully written story, filled with romance, mystery and some unexpected events! I will be looking forward to Ms. Rossano's next story! I hope you all enjoy this read as much as I did!

Just FYI~ This story does contain some violence, but no sex or swearing.

You have subscribed to alerts for Rachel Rossano.

You have been added to Rachel Rossano's favorite list.

You can also sign-up to receive email notifications whenever Rachel Rossano releases a new book.