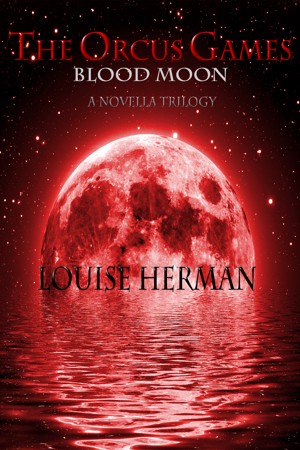 By Louise Herman
Rated 4.00/5 based on 2 reviews
Sexy, action packed and hair raising magical situations...The Orcus Games: Blood Moon is for all real Fantasy and Young Adult Fans! More
Guilty until you survive all zones…The Orcus Games is ready to put you on trial…

The lives of a witch and wizard couple, a new vampire and a rogue Lycan intertwine in three magical tales of love, loss and revenge.

The Craft - When witch and wizard couple, Heather and Phoenix make that fatal mistake on that, ‘Blood Moon’ night, they never thought they would be forced to working with a loner Lycan but…is he the only one who saw the, ‘accidental’ fatal act?

The Clan – Ardan would do anything for his wife and daughter but he could not protect them from the new blood thirsty life that was about to be bestowed onto them but what happens when he risks his immortal life for them?

The Pack – Caleb was always the Lycan that wanted more! With constant schemes and risky deals, to increase the potential of a better lifestyle, he thought his latest underground deal was the perfect idea, until he loses more than just his money…

In between reading James Herbert novels and drinking too much coffee, she writes Young Adult Urban Fantasy and Paranormal Romance novels.

Louise Herman has currently written five YA Fantasy books to date (December 2015); The Orcus Games Prequel Trilogy and The Split Blood series, which take the reader on a journey of magic, mystery, obsession and forbidden love with seductively dark consequences.

I really enjoyed this novella as it has everything I like in my fantasy books - witches, werewolves, vampires and magic.

It throws you straight into it and even though it's a short story it builds up the character and scenes quickly.

I won't do a spoiler like the other review (as I don't think it's fair to the author or other readers to do this!), however this book introduces you to the characters and their personalities and the second book in the series (Mistress V) goes more into detail about what the orcus games is.

I got the second book from Amazon and I must admit that I enjoyed this one more than the first one as I love a feisty female vampire and Mistress V didn't disappoint me in this.

Overall: I would say if your looking for a fast pace, fantasy adventure novella with strong characters and scenes then this is for you. 9 out of 10

(Source: Downloaded for free from Smashwords.)
This is a fantasy novella, about witches, vampires, and werewolves. The first chapter concerns some witches who are having some sort of a festival and a feast. The second chapter is about some people who are attacked and turned into vampires, and the third chapter is about a down-on-his-luck werewolf who accidentally kills his wife.
In the fourth chapter, the werewolf discovers the witches, who have just killed a vampire, and tries to blackmail them in return for not telling anyone they have killed a vampire.

Anyway, the main characters all end up arrested or kidnapped in some way or another, and with a bit of adventure along the way, all end up as the newest contestants for ‘The Orcus Games’.
This is where this novella ends.

I have to say that I did get a little confused at the beginning of this one. We are very quickly introduced to three different stories, which then come together later on.
Initially being thrown into three stories was a bit of a shock though, and I was then sat there puzzling what the hell each story had in common with the others!
I persevered with this though, and eventually the characters met and interacted. This being a prequel novella though, the story ends where I believed ‘The Orcus Games’ were about to start. What exactly ‘The Orcus Games’ are though I don’t know! I thought that this prequel would be an introduction to the series, but I don’t think it gave you enough of an idea as to what the next book would be about, to really let you know if you would like it or not.

This novella was okay, but I didn’t find that it grabbed me. I kept reading to find out what would happen, but I wasn’t desperate to find out what happened next.
I might be tempted to read the next books in this series if I find them for free, but I can’t say I’m bothered enough to buy them. Maybe if I knew more about what ‘The Orcus Games’ were going to actually be about I would be more interested.
Overall; an okay novella, a bit confusing initially, but does build up to the next book I suppose.
5 out of 10.

You have subscribed to alerts for Louise Herman.

You have been added to Louise Herman's favorite list.

You can also sign-up to receive email notifications whenever Louise Herman releases a new book.