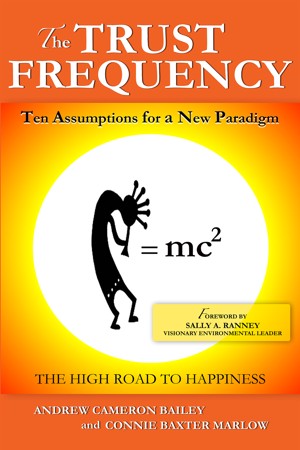 The Trust Frequency: Ten Assumptions For A New Paradigm

Humanity stands at the brink of an unprecedented change, a “great awakening,” the Omega Point, the evolutionary quantum leap predicted by Pierre Teilhard de Chardin in The Future of Man (1950). All around us we see signs of gathering crisis, economic collapse and climate change. Contrary to popular sentiment, this is actually a good thing! The old systems based on fear and doubt are collapsing, as indeed they must. Only through crisis do we grow. Imagine what the caterpillar goes through on its way to becoming the butterfly. As we awaken, we realize we need a new reality, a new paradigm, but how do we get there?

We have been engaged in the endless “pursuit of happiness,” but happiness has eluded us. Why? Because for thousands of years we have based our consensus reality on a set of limited, erroneous, fear-based assumptions about ourselves, our species and about the entire universe. We can change that! The choice to move into the Trust Frequency triggers a shift to an elevated state of Being, individually and collectively. Once we learn to access this state of peace, love, beauty and abundance, we find ourselves operating at a completely different vibratory rate, where the laws and rules are different. Wisdom, prosperity and enlightenment are the order of the day. We are happy. How do we get there? We elevate our consciousness.

How do we do that? We change our minds, or rather, the content of our minds. We examine and update our fundamental assumptions about the nature of reality, act according to our inner knowing, and our outer world changes accordingly. It’s an infinitely more beautiful Universe than we ever suspected. This book takes us there, right to the heart of it. Since we can choose our own reality, let us create a life of grace and ease, abundance, beauty and balance.

We're not saying it's easy.The process of transformation takes courage and commitment. We have to examine and change deeply ingrained, unconscious habits and assumptions, but once we bring them into the light, and realize that we did not choose many of our core beliefs, the process has begun. We are on the way to a higher vibratory reality. Welcome to the Trust Frequency! It's a whole new world.
Available ebook formats: epub mobi pdf lrf pdb txt html
First 15% Sample: epub mobi (Kindle) lrf more Online Reader
pdb
Price: $6.99 USD
Buy Add to Library Give as a Gift
How gifting works
Create Widget
Tags: climate change how to be happy change my life changed the world of people meditation training change your future healing americas soul change thinking ascending awareness meditation nonduality ascension guru yoga change life selfhelp spiritual trust frequency global warming solution higher vibration open your heart high road to happiness
About Andrew Cameron Bailey

Andrew Cameron Bailey and Connie Baxter Marlow are original thinkers, writers, photographers, film-makers, and inspirational public speakers. They met during a gathering of indigenous elders and shamans at the Omega Institute in upstate New York in October 2003. It was immediately obvious that they had destiny together, and they got right to work. This life-transforming book, and the workshop that has developed from it, follow on the heels of their ground-breaking film “IN SEARCH OF THE FUTURE: What Do The Wise Ones Know?”

Andrew is a writer of both fiction and non-fiction. He was born in England, and grew up in South Africa, where he studied the arts and sciences and lectured in mathematics and chemistry. He sailed to the United States in 1969, and settled in Santa Cruz, California, where he studied with a number of the leaders of the emerging consciousness movement. He later raised five children in New York, where he co-founded a 501(c)3 non-profit organization which works with the Kalahari Bushmen in southern Africa.

Connie is a Mayflower descendant, and is one of the Baxters of Maine She grew up in a family of visionary philanthropists and politicians, graduated from UC Berkeley with an honors degree in economics in 1968, and went on to raise three children in Aspen, Colorado. Connie has a unique and inspiring world-view, distilled from more than twenty years of interaction with visionary Native American elders, in both North America and Mexico, for whom she creates forums to share their vision of the nature of the Universe.

They apply The Trust Frequency paradigm to the evolutionary aspect of relationships in their online course “The Dance of Souls: The Relationship (R)Evolution” which is available on Humanity Stream + Humanity’s Team Masterclass Platform. It is also available individually on Thinkific.

Their First Fifty Years Project illuminates the syntheses between the Europeans and the Native American that gave birth to the American mind, spirit and democracy. Watch their film “SEEDS OF FREEDOM: A Vision for America” HERE.

Their documentary film “IN SEARCH OF THE FUTURE: What do the Wise Ones Know?” is a companion piece to The Trust Frequency book and features visionary indigenous elders, Western scientists and futurists. Watch it online HERE.

For links to their work go to https://Linktr.ee/ConnieandAndrew

Reviews of The Trust Frequency: Ten Assumptions For A New Paradigm by Andrew Cameron Bailey

You have subscribed to alerts for Andrew Cameron Bailey.

You have been added to Andrew Cameron Bailey's favorite list.

You can also sign-up to receive email notifications whenever Andrew Cameron Bailey releases a new book.