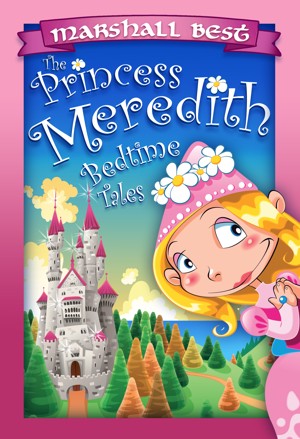 By Marshall Best
A collection of five fairytale stories perfect for reading to children ages 3 through 10 at bedtime with all the things young children love; ponies, castles, beautiful dresses, fairies, birthday parties, special gifts, playing by the beach, mugs of hot chocolate, and Princess Meredith's very favorite: cinnamon rolls with raisins on top!

Marshall Best is an avid reader, father of six and business owner. In the past several years he has found his love of writing as well. What began as a desire to write a story for his children has evolved into a nine book series.

Marshall has done extensive research into the history behind the legends, people and places of England, Scotland and Ireland involved in his books. He loves being able to weave real people and legends into his stories making them come alive. He is definitely a writer that tends to the details often mapping out timetables, calendars, genealogies, etc. that pertain to his book to ensure that it is as realistic as possible.

Marshall also enjoys putting real life issues into his books, delving into a bit of philosophy while entertaining with orcs, dragons, magic and battles. He is someone who loves a grand adventure but makes sure it's not a shallow one.

You have subscribed to alerts for Marshall Best.

You have been added to Marshall Best's favorite list.

You can also sign-up to receive email notifications whenever Marshall Best releases a new book.