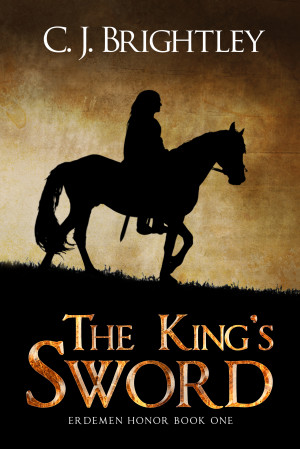 By C. J. Brightley
Rated 4.67/5 based on 3 reviews
A disillusioned soldier. A spoiled, untried prince. A coup that threatens the country they love.

When retired soldier Kemen finds the young prince Hakan fleeing an attempted assassination, he reluctantly takes the role of mentor and guardian.

Invasion looms, and Kemen's decisions will shape the fate of a nation. What will he sacrifice for friendship and honor? More
A disillusioned soldier. A spoiled, untried prince. A coup that threatens the country they love.

When retired soldier Kemen finds the young prince Hakan fleeing an attempted assassination, he reluctantly takes the role of mentor and guardian. Keeping the prince alive is challenging enough. Making him a man is harder.

As usurper Vidar tightens his grip on power, Kemen wrestles with questions of duty and honor. What if the prince isn’t the best ruler after all?

C. J. Brightley grew up in Georgia. After a career in national security, she turned her attention to writing. She lives with her husband and young children in Northern Virginia. She blogs at CJBrightley.com, where you can find sneak peeks of upcoming books, deleted scenes, background material, thoughts on writing, and books she enjoys.

She also runs the Noblebright.org website dedicated to highlighting the best of noblebright fantasy. Noblebright fantasy characters have the courage to risk kindness, honesty, integrity, and love; to fight against their own flaws and the darkness of the world around them; and to find hope in a grim world.

Reviews of The King's Sword by C. J. Brightley

This review is for the Kindle edition ebook.

An old soldier, a spoiled prince, and a coup; all the ingredients for a great novel.

The old soldier has lived alone for years, shunned by the other races in his world. The prince nearly froze to death, running from the coup. If the soldier can teach the prince how to act like a king, the army might help him to regain the kingdom.

Seldom does a book come along that sweeps the reader away into a fantasy and let that reader get lost. I have to be honest, I was avoiding this book for a while now. It just did not seem like the kind of book I would enjoy. I started reading, and almost could not put the book down. It grabbed my imagination and hung on for the entire book. I would like to see this offered through Amazon, as well as SmashWords. That is the only thing I did not like about this story.

I believe C. J. Brightley writes to entertain the reader. Her book certainly entertained me, at least. It kept my attention riveted, something few books today can do.

I can easily recommend this book to all fantasy readers. I think you will find it is something different, something outside the standard fantasy field. I actually found myself cheering for the prince, before the story ended. I have already grabbed the next book in this wonderful series, and am sure I will enjoy it as much as the first book.

It's enjoyable, and even fresh, these days, to read a book in which the cynical, selfish opportunist is the antagonist, and the protagonist is a straightforwardly decent man. This is such a book.

I very much enjoyed the first-person viewpoint character, an ex-soldier discharged after an injury who happens across a prince in distress. (That's a convenient coincidence, but it's the only one the plot relies on.) Kemen Sendoa is a big man from a dark-skinned ethnic minority, raised as a soldier as is the tradition with foundlings and orphans in his country. Women are scared of him. Men are wary of him. He'd really like to settle down and have a family, but that's not going to happen, he's pretty sure. He's lost friends, he's battered by injury (and becomes more battered as the story progresses), but he retains a powerful loyalty to his country and its people.

His mentoring of the young prince is firm, but not harsh. When he's hailed as a hero for fighting off raiders, he's genuinely modest about it. He's not without his secret shame, though, and he does have a character arc as he confronts it.

The prince is less fully rounded, but definitely has a lot of development in the course of the book, under Sendoa's guidance. Rather than giving us a training montage, the author spends considerable time on the process of his training, which I welcome as more realistic than the usual "Chosen One is whiny and won't put in the work, succeeds anyway when put under pressure" trope.

I did occasionally feel that I was reading a geography textbook about the setting, and although it was relatively interesting and didn't go on and on, I did feel that the background information could have been incorporated into the narrative more smoothly or left out altogether. It wasn't quite what I would consider infodump, but it was headed in that direction.

The language (apart from a few common errors which I will pass on to the author) was smooth and competent and didn't distract from the story.

Overall, enjoyable. On my 0-9 subscale within the 4-star range, this scores a 3, but it shows enough potential that I'm anticipating a 5 from the sequel.

The author gave me a review copy in expectation of an honest review.

A straightforward tale of friendship and honor. Nicely written.

You have subscribed to Smashwords Alerts new release notifications for C. J. Brightley.

You have been added to C. J. Brightley's favorite list.

You can also sign-up to receive email notifications whenever C. J. Brightley releases a new book.