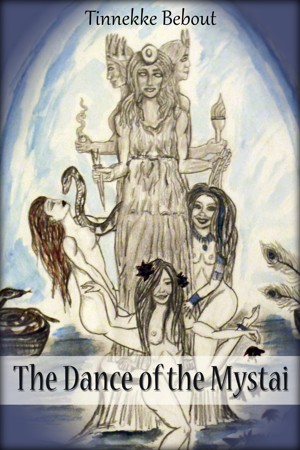 The Dance of the Mystai

Born and raised in the Midwest, Tinnekke Bebout has found her creative voice mostly through the genres of poetry and essays.
She has also made forays into the short fiction realm and is currently writing a novel, which she hopes to have ready by the middle of summer 2018. Tinnekke is the author of The Dance of the Mystai and was a contributor to Hekate: Her Sacred Fires. She has been featured in such publications as Goddess, Circle, PanGaia, The Loom, and The Goat and Candle. She has also been a contributor to She of 10, 000 Names, Pagan Writers Presents Samhain, Taboo, and the short fiction anthology For the Love of the Gods. Tinnekke is co-creator of The Hekate Tarot along with sister priestess Hope Ezerins and creator of The Female Mystique Tarot, which will be released in June 2017.

Tinnekke is the founder of The Temple of Hekate Einalian and the Mystai of the Moon priestesshood. She teaches women a Mystery Tradition that has at its heart recreating the ancient Mysteries of Hekate and revisioning them for modern times. Tinnekke was made a Torchbearer in the Covenant of Hekate in 2013 and was ordained in the Apple Branch tradition as a legal clergy in 2015. She travels around the US doing workshops on the tarot and on the process of conscious creation in magickal workings. Her most recent appearance was at Paganicon 2017.

Reviews of The Dance of the Mystai by Tinnekke Bebout

You have subscribed to Smashwords Alerts new release notifications for Tinnekke Bebout.

You can also sign-up to receive email notifications whenever Tinnekke Bebout releases a new book.