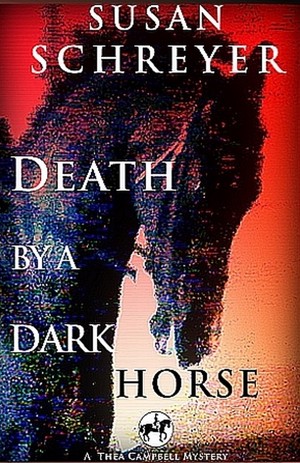 Death By A Dark Horse

By Susan Schreyer
Rated 4.75/5 based on 4 reviews
Thea Campbell goes out for revenge when the one person who is simultaneously the most likely and least likely candidate for thief steals her horse. But Thea is wrong. As close to dead wrong as she ever wishes to get.
Download: epub mobi (Kindle) pdf more Online Reader
rtf lrf pdb txt
Price: Free! USD
Add to Library
Create Widget
Tags: mystery romance mystery mystery suspense horse mystery
About Susan Schreyer

Susan Schreyer lives and writes in Washington State. She shares space with her husband, son and, from time to time, her daughter. Her three cats have given up on supervising her writing and her horse never had any interest in anything but dressage and eating, anyway. From time to time Susan imagines herself resurrecting her blogs, but don't hold your breath. She's currently livin' the dream and can't be relied upon for follow-through.

Her Thea Campbell Mystery series includes (in order of publication) DEATH BY A DARK HORSE, LEVELS OF DECEPTION, AN ERROR IN JUDGMENT, BUSHWHACKED, SHOOTING TO KILL and SAVING THE QUEEN OF DIAMONDS. Another is in the works, but is currently nameless.

Superb mystery. You care about the characters; when their actions don't seem to make sense from one character's point of view, the focus switches to the person who performed the actions, and, from his/her point of view, the actions are logical. I really couldn't put the book down, and I'm looking forward to reading the next 4 in the series.

Thea Campbell goes out for revenge when the one person who is simultaneously the most likely and least likely candidate for thief steals her horse. But Olympic hopeful Valerie Parsons is past caring about being arrested: she’s dead, and the police think Thea’s horse is the killer.

Desperate to prove her horse’s innocence, Thea is soon drawn into ever-deepening danger as she confronts those looking to settle the score. Toss in her wrecked love life and a sexy geology professor who stirs up more than dust, and Thea’s life is out of control. Too many details are not adding up. Who is the killer? And will Thea find them before they find her?

The cleverly titled Death By A Dark Horse has all the trappings of an engaging murder mystery: high stakes, an independent heroine, intimidating goons and a clever villain. All of this is set upon a backdrop of horse-riding and dressage, so right off the bat I can easily recommend this story to horse lovers. If you’re not much of a horse person, rest assured this novel might still have something to offer you.

As a main character, Thea is very much someone you can relate to. She’s clever — and runs her own accounting business — but at the same time she’s also the “average Jane” of the story who is caught up in events greater than herself. The same could be said for all the characters in the book: Schreyer manages to avoid stereotypes and make her cast believable. Even the police — who at first I found very annoying and frustrating — ultimately are behaving as you’d expect them to behave if some average citizen decided to play detective.

As for the plot, it’s fast-paced and entertaining, and most importantly for a murder mystery, the resolution isn’t predictable: the identity of the killer was certainly a ‘dark horse’ that took me by surprise. Interwoven with the murder plot is Thea’s love life (in crisis) and her insecurities when it comes to horse-riding — while neither of these two elements dominate in the novel, they provide much needed colour and background to Thea’s character.

In sum, if you enjoy murder-mysteries with strong female leads, or if you like horses, then this might be a book for you.

I do love a good mystery, and this was a good and well written mystery. I enjoyed all the characters and all their situations. I was entertained and intrigued throughout the entire book. A great read, well worth buying.

This is a must-read for anyone who loves a good mystery, one that is well written and maintains suspense until the end. There’s a chance you’ll recognize people you know in the assortment of well-drawn characters in this story -- Thea, the horse owner, who sets out to prove her horse didn’t kill the victim, and who then becomes a person of interest in the case; Thea’s loving aunt and uncle; her unpredictibe sister; her accounting business clients; the boyfriend she wants to break up with; the man she’s attracted to. There are moments when absolutely nothing goes right for Thea, including her love life. This makes us root for her all the more.
The barns and paddocks in a small town in the state of Washington make up much of the setting and draw you into the world of horseback riding, especially dressage.
This is a mystery that relies on story, not gore or explicit sex, to keep the reader entertained. Well worth reading!!

You have subscribed to alerts for Susan Schreyer.

You have been added to Susan Schreyer's favorite list.

You can also sign-up to receive email notifications whenever Susan Schreyer releases a new book.