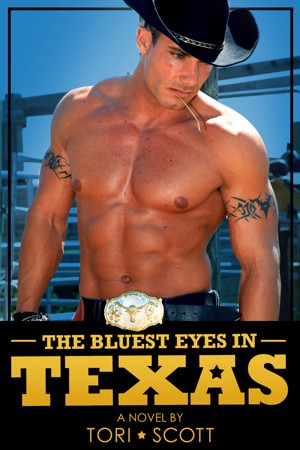 The Bluest Eyes in Texas

By Tori Scott
Rated 5.00/5 based on 2 reviews
Bull rider Cooper Saunders has a shot at the PBR championship until a bull shatters his body, and puts him in very real danger of never being able to walk again.

Physical therapist Nancy Phillips is not about to let Cooper give up, not after she worked so hard to get him back in shape for the finals. Now she must not only help him find the will to live, but also to get out of that wheelchair. More
Bull rider Cooper Saunders has a shot at the PBR championship until a bull not only shatters his body and puts him in danger of never walking again, but it also tramples his spirit. Cooper is ready to give up on life, not wanting to be a burden on others, until his neighbors in Morris Springs, Texas, show him how much he has to live for.

Physical therapist Nancy Phillips is not about to let Cooper give up, not after she worked so hard to get him back in shape for the finals. Now she must not only help him find the will to live, but also give him the motivation to get out of that wheelchair. With the help of newly-orphaned Becky McCallum and Nancy's friends in Morris Springs, Nancy shows Cooper how much he still has to offer, to his family, the community, and to her.

The Bluest Eyes in Texas is Book Three in the Lone Star Cowboys series, with return appearances by many of the characters from Blame it on Texas and Blue Moon over Texas.

About the Series: Lone Star Cowboys

The town of Morris Springs, Texas, brings together some unlikely friends who make the town their home and band together to create a haven for broken cowboys, wanna be rodeo stars, and special needs children at the Triple S Ranch and Hippotherapy Center. There, the friends forge a bond stronger than blood and learn they are stronger than they think.

The Bluest Eyes in Texas by Tori Scott is the third book to take place in Morris Springs, Texas. I enjoyed it just as much as the first two books. While again you are able to be kept up to date with the couples from the first two books, it is not necessary to have read them to enjoy this one. This is the story of Nancy, a physical therapist, and Cooper, an injured bull rider. Living in a small town myself, I found it to be a realistic portrayal of how small rural communities can look out and help one another. The development of the relationship between Nancy and Cooper is just wonderful written, from her hesitation to his need to prove to himself that “he’s still a man”. The romance element was right on the money for me, as well as seeing how the characters overcame the obstacles that life had thrown their way. When a child is included who needs Nancy’s help and love too, you have one fabulous read.

Tori Scott does an amazing job telling this story. Cooper Saunders pro Bull rider for years and has taken numerous beatings to his body. Cooper is sent to his hometown of Morris Springs for rehab and recovery. Nancy if you've read the previous books moved to town a few years ago to be closer to her college friend. She's looking for a change in occupation. Nancy decides she want to do physical therapy. Cooper becomes one of her patients and the story progresses from there. Determined to return to bull riding, Cooper is stubborn and pushing hard to be ready to finish out the season. Nancy is attracted to him but tells herself he's not the man she's looking for , that he's too stubborn and focused on the rodeo to care about anything else. Cooper is intrigued by the sexy red headed therapist and they work together to get him ready to ride again. After being released he returns to the rodeo to finish out the season. Nancy decides to go to the rodeo in Vegas with her friends and Coopers parents. Determined to fight her attraction for Cooper she gives him the cold shoulder while at the rodeo and is determined to keep her distance until he is badly injured during his second ride. Cooper falls into a slump and basically gives up any chance at recovering again and feels he will be a burden to his family and friends, while Nancy is determined to get him on his feet again and not giving up on him. She pushes him and challenges him along the way and the sparks fly. This story is an emotional ride of courage, loss, determination and love. You feel the characters pains and triumphs, laugh and cry with them, and genuinely feel like part of their story. The Bluest Eyes in Texas is wonderfully written and will leave you wanting more. There are twists and turns and heartwarming surprises as well along the way. I can't wait until the next book in this series to see how these characters are moving forward in their new lives.

You have subscribed to alerts for Tori Scott.