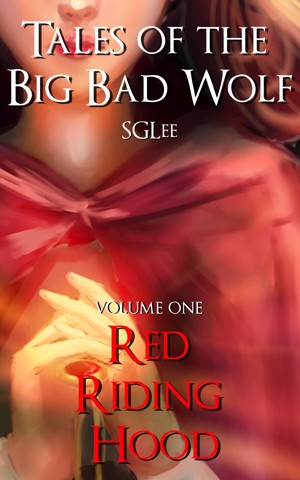 In the meantime, the world around them begins a slow shift towards darkness and the true nature of the Wolf unfolds.

A writer in all her spare time, a creator all the time.

The first arc, Red Riding Hood, of SG Lee’s web serial—The Tales of the Big Bad Wolf – has finished serializing as of February 3, 2013 and published shortly after. This particular story is loosely based on the Grimm fairytale and centers on the iconic triad: Red Riding Hood, Wolf, and Hunter. Elanore Redley is a traveling healer who makes her way to Winchester village in the Northlands to care for her ailing grandmother, wife of the late mayor. Along the way, she encounters an Unthing and learns more about them when she meets the reclusive Count Maximilian Wolfram. At the same time, Hunter Edmund Ormond must resolve his feelings with Elanore and discover the truth behind his past. Through her interactions with the Wolframs, the townsfolk, and the mysterious lady of the snow, Elanore and Edmund discover that they may hold the key in stopping the Unthings.

While the beginning was a little slow to draw the reader in, the world-building makes up for it. The author immerses the reader into a setting, where magic is a rare art and legendary creatures from the stories may actually exist. This interweaving of stories (as noted by Count Wolfram’s book and the author’s endnotes) plays a vital role throughout the arc and questions whether one is bound by the laws of a story or can ultimately choose their fate. As such the character interactions are the major driver of the plot and allow us a glimpse of the backstories of some of the central and supporting characters. For example, the awkward interaction between the Guildmaster Wilhelm and Elanore depicted later in the story was well executed as shown by the descriptive writing of the guildmaster’s expressions and thoughts. This is undoubtedly the author’s strength. As for the plot itself, it was solid and played with the idea of the Wolf as either a villain or hero—a concept that greatly interested me as I eagerly read through the chapters to see how it would all play out. The ending was paced appropriately and resolved itself neatly with a few loose ends that, according to the author, will be covered in the next installment.

Overall, I enjoyed reading this serial for the characters and the allusions to the other stories in the world of the Twin Moons. This series is highly recommended for those who enjoy fantasy and folklore in a new perspective and with an exciting plot. The next installment, according to the author, will be starting in May 2013. How exciting!

You have subscribed to alerts for Sg Lee.

You have been added to Sg Lee's favorite list.

You can also sign-up to receive email notifications whenever Sg Lee releases a new book.