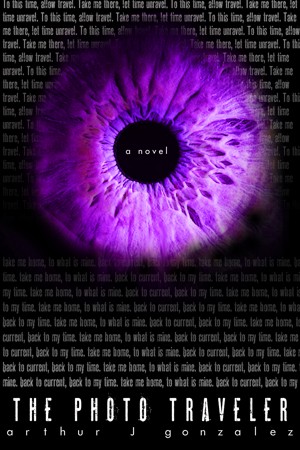 By Arthur J Gonzalez
Rated 5.00/5 based on 2 reviews
Seventeen-year-old Gavin learns that he is one of the last descendants of a small group of Photo Travelers—people who can time travel through photos and images. But his initial excitement turns to fear, when he soon discovers that he and his grandparents are being pursued by the fierce remnants of a radical European Photo Traveler cult, the Peace Hunters. What Gavin has, they want! More
Seventeen-year-old Gavin Hillstone is resigned to being miserable for the rest of his life. Left alone in the world after his parents died in a fire when he was four, he was placed in foster care, which for him meant ending up in an abusive home with an alcoholic adoptive father.

Gavin’s only escape is in taking and creating images. His camera is his refuge from the unending torture and isolation of daily life in his “family.”

Until he learns by accident that he isn’t alone in the world after all. His father’s parents are still alive and living in Washington DC.

When he takes the plunge and travels 3,000 miles to find his grandparents, he learns that they—and he—are part of something much bigger, and more dangerous, than he could ever have imagined. Something that has always put his family at risk and that will now threaten his own life, while forever changing it.

He learns that he is one of the last descendants of a small group of Photo Travelers—people who can travel through time and space through images. But his initial excitement turns to fear, when he soon discovers that he and his grandparents are being pursued by the fierce remnants of a radical European Photo Traveler cult, the Peace Hunters. What Gavin has, they want!

His adventure will take him to past eras, like The Great Depression and the Salem Witch Trials. Gavin will have to discover who he really is and must make choices that spell the difference between life and death for himself, for the relatives he now knows and loves, and for the girl he will come to love.

For Gavin, life will never be the same.

THE PHOTO TRAVELER is young adult author Arthur J. Gonzalez's first novel. Arthur was born and raised in Miami surrounded by his loud Cuban family. He graduated from the University of Florida, where he acquired his coffee obsession and his chocolate hoarding antics. He's the proud father of one baby girl, Sookie—his miniature schnoodle dog. Arthur is a self-professed goofball who spends 98% of his life laughing. He's now working on his second novel.

I just finished this book a few days ago and now I can't wait for the second book to come out. I really thought the characters were will done. You can feel their emotions as the author seems to bring them to life. I really loved the story line and couldn't wait to see what was going to happen next. The story wasn't difficult to follow though I found so many twists that made it interesting reading. I will be buying the next book because I'm hooked.

I was drawn into this story from the first paragraph. You could tell the torment behind Gavin's actions even in the opening scene where his "sister" ignores him and subsequently causes him the torture that follows. Right after that episode gavin discovers that he still has grandparents living across the country and he hightails it to the bus station and "gets the heck out of Dodge". I think that those actions are fairly believable and I appreciate the fact that Gonzalez gives us backstory about Gavin's adoptive parents and his living situation. We find out that life hasn't always been like this for him, and the further you read, the more you understand why things are the way they are.

There are several things that stood out to me throughout the book; the initial meeting with Yogi being one (Hello, that camera was a major tip off!!!),Gavin's visits with his parents (that is just cool and confusing at the same time), and Gavin's reaction to Alanna's picture being another. I knew from the moment I read that scene that it would become a major player in the book. I am very interested to see how Gonzalez unfolds that development throughout the next book.

Overall, this was a very well written book, with good character development and backstory. There are many unanswered questions, but I knew going into this book that it was the first in a series, so I expect some of those questions to be answered in The Peace Hunters. I think this fully deserves the 5 stars I gave it :)

You have subscribed to alerts for Arthur J Gonzalez.

You have been added to Arthur J Gonzalez's favorite list.

You can also sign-up to receive email notifications whenever Arthur J Gonzalez releases a new book.