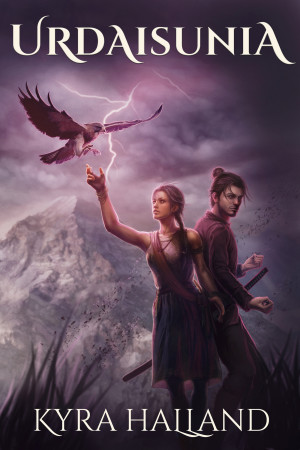 By Kyra Halland
Rated 4.60/5 based on 5 reviews
In Urdaisunia, a land torn by war and drought and abandoned by the gods, a widowed rebel and a prince walk intertwining paths of danger, love, and war to save the land they both love. More
Urdaisunia, once favored by the gods above all other lands, now lies defeated and in ruins. The gods, displeased by the Urdais' weakness, have turned their backs on the land and left it to die.

Prince Eruz, heir to the Sazar throne, is driven by his conscience to walk a dangerous line between loyalty and treason to do what he believes is best for all the people of Urdaisunia.

When Rashali and Eruz meet by chance, the gods take notice, and a divine wager sends peasant and prince on intertwining paths of danger, intrigue, love, and war in their fight to save the land they both love - Urdaisunia.

Kyra Halland has always loved fantasy. She has also always loved a good love story. She combines those two loves by writing the kinds of romantic fantasy novels she loves to read, tales of magical worlds where complicated, honorable heroes and strong, smart, feminine heroines work together to save their world - or their own small corner of it - and each other.

Reviews of Urdaisunia by Kyra Halland

The story line flowed nicely as we near a war that few want, but seems inevitable, with the usual greedy politics of the leaders.

Thought all the men were a bit weak minded. Even the main male character. He wanted to achieve great things but didn't seem to push himself, unlike the female, she is one tough cookie.

Not a great lover of stories with gods in. The gods always seem as daft as humans, yet they're supposed to be these great, all powerful beings. Just the same in this tale really, they seemed to bicker and get themselves banned etc. I think this story could have been told just as well without their presence, but it might have been based on some mythology or other.

A nice little romance develops, nothing too heavy .

From start to finish, there was never a moment where the story lags or the author describes things so much as to distract you from everything else. It flows beautifully, with just enough detail and depth to tantalise the imagination and pull at the heart strings. I would definitely recommend it, not to mention snap up any other books by this author in a heartbeat!

I wasn't sure whether the genre was right for me, but this book was recommended by a friend and as I was on holiday and had time, I gave it a go. Was I glad to have time! I couldn't put it down, I wanted to know what was happening next. The characters feel very real to me as did the whole world the author describes in vivid detail. I really felt and suffered with the main character (and it felt so good to me to have a strong FEMALE main character) and saw many connections with today's world that set me thinking. I am looking forward to read more by this author.

When I read the blurb about this book, I was intrigued and interested, although I usually shy away from novels of this nature, immortals and mortals, mainly because the few I have read usually lack depth and fail to deliver a convincing believable storyline. However, this one proved an exception.

The story is set around Rashali, a peasant Urdai widow, who, despite her reluctance to act, shows she is a strong and confident individual, whose presence and bearing has a great impact on all those who cross her path. Some of the strange names took some getting used to, but this was not an issue for me. The characters were solid and believable, and the situations they found themselves in was well delivered.

As I read, I could easily have believed this was set in a middle-eastern country thousands of years ago, and the writing was sufficiently descriptive enabling me to picture the world the story was set reasonably well, which is essential in Epic Fantasy novels. The story moved along at a good pace and kept my interest from start to finish, and there was a good balance of romance, feuding, and fighting. The interference of the gods in the mortal world was minimal but effective, and it was refreshing to see dissention amongst the gods, and the adverse effect on them because of it.

Overall, Urdaisunia was a well written novel, which I enjoyed, and would recommend to anyone who enjoys adult Fantasy.

(reviewed 27 days after purchase)
Sharon Stevenson reviewed on May 6, 2013

'Urdaisunia' is an epic fantasy novel about a peasant girl named Rashali, whose choice of a romantic partner is linked closely to her own destiny and the future of her people.

My only complaint is the number of characters at the beginning, I found it difficult to remember them with all their unusual names, but as the story goes on it becomes easier, the main characters make themselves known and the heartfelt story begins.

This was something different for me, I usually tend towards more modern fantasy novels so I was pleasantly surprised by how much I enjoyed this.

World building is essential in making an epic fantasy novel believable and this was very well done here. The story was also solid, emotional and intriguing. There were moments when I felt truly worried for Rashali and what might happen to her in the brutal world Halland has created. I wasn't sure what to make of Prince Eruz at first but his character grew on me by the end.

Overall this was an excellent adult fantasy novel and I would recommend it to just about anyone.

You have subscribed to alerts for Kyra Halland.

You have been added to Kyra Halland's favorite list.

You can also sign-up to receive email notifications whenever Kyra Halland releases a new book.