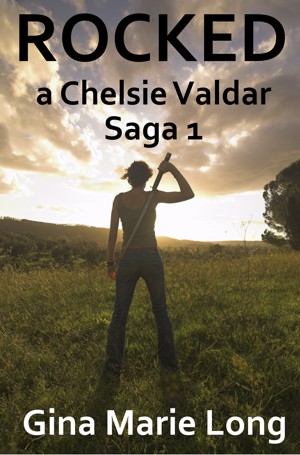 By Gina Marie Long
Rated 3.00/5 based on 1 review
ROCKED: A modern-day Viking warrior teen, Chelsie Valdar, must find an ancient ancestor's mystical sword before the impending Apocalypse and flee to safety with her brother. Several Bigfoot and an outcast werecat help with the search and offer protection, especially when a deranged enemy is infatuated with Chelsie and wants to take possession of the sword. The clock is ticking. More
ROCKED: The Apocalypse is coming…in one week. Chelsie Valdar and her brother are modern-day Viking warrior teenagers. They must find a mystical sword belonging to their ancient ancestor and flee to safety at a secret shelter, if they hope to survive. As the clock ticks, several Bigfoot and an outcast werecat become invaluable friends helping with the search for the sword and offering supernatural protection. Misfortune haunts their every move. Conflicts delay their progress. Especially when a devious and deranged enemy is infatuated with Chelsie and hungers for the sword, desperate to escape to the shelter with Chelsie by his side. Time is running out.
Available ebook formats: epub mobi pdf rtf lrf pdb txt html
First 20% Sample: mobi (Kindle) lrf pdb Online Reader
Price: $3.99 USD
Buy Add to Library Give as a Gift
How gifting works
Create Widget
Tags: vampires urban fantasy fantasy young adult supernatural werewolves teen bigfoot viking paranormal thriller werecats gina marie long
About Gina Marie Long

She has written the Unknown Touch-Werewolf Series, Rocked: A Chelsie Valdar Saga, and The Reaper's Cat.

Gina's fiction stories are inspired from her interest in the supernatural, science fiction and fantasy world. She enjoys reading, watching evening TV shows, movies and listening to music.

Writing indulges her passion for the entertainment arts, giving her active mind a playground of possibilities to explore. She stays active on social media sites and blogging, making connections with others who share the same interests.

She writes about werewolves, vampires, witches, werecats, Bigfoot, an occasional demon, psychics, Vikings, and riveting human characters. But not ALL in the same book! In addition, a light romance is included to spice things up (come on-every book, movie and TV show has some sort of a love story in it). The books do not fall under the romance category...just enough in the storyline to satisfy the girls. And the boys can breathe easy with the knowledge that they're not reading a romance novel but a paranormal thriller, instead. Depending on which series, the ages of the main characters are 16 through 30. Most are on the younger side.

"It's exciting to create strong characters that the readers fall in love with…or want to strangle! Writing books about other beings, such as werewolves and vampires, allows rules to be broken concerning life and the world as we know it. The idea to have these supernatural species living and breathing among us is so wickedly intriguing. Having close contact with them, developing relationships, and dealing with the good vs. the evil - it sweeps you away into another reality – an escape from real life. You wonder and worry about what the characters will stumble upon next. Or, what horrific tragedy knocks them flat on their faces."~~Gina

She lives in Highland, Illinois, with her husband and Jessie Cat.

Keep track of Gina at: http://www.ginamarielong.com

Review
Johanna Thiemann reviewed on May 28, 2013

Since I love urban fantasy, I was really excited for this tour. I couldn't recall ever having read a YA urban fantasy novel. The book's cover wasn't really enticing but for me a perfect cover isn't a must. The premise sounded really interesting though.

Chelsie Valdar and her family are Chosen Ones.

They have received places in a shelter when the apocalypse (outbreak of the Yellowstone volcano) hits. They're the only human chosen ones because they are Viking descendants who guard the famous sword Tyrfing which can easily slay all supernatural creatures. Chelsie learned about the apocalypse from Jessie, a werecat with some 'supernatural flaws'.

The book is divided into chapters which are named e.g. 'Day 2 - Morning". Thus, we always know how much time is still left for the teenagers to reach their shelter. Because finding the sword turns out to be much more difficult than they thought. Ash, Chelsie's brother, Bo and Lucas, Chelsie's best Bigfoot friends, and Mira, Bo's girlfriend, come along on the search to guard her.

I enjoyed the action-packed plot a lot. There were many aspects that were new for me as a reader. I've never read anything about Bigfoot creatures before. Those huge, hairy guys were really adorable. I wish I had a Bigfoot best friend. Even though the mindreading part might be a downside. All supernatural creatures have mindreading abilities to some degree. Therefore, Chelsie and her brother are the only one who can't read minds. That was extremely interesting for the plot development and the way the characters talked to each other.

Unfortunately, there were also some things I didn't like about the book. I can't say that I liked Chelsie very much which might just be a personal thing. Her interest in a certain guy wasn't at all convincing. It was more like 'Oh hey, he's opening up and showing some interest for me. So let's hook up then'. That wasn't in the least, not even a teeny tiny bit romantic. She even confirms herself that she would have also taken the other guy if he had shown some interest before. I can't see any true feeling of her own besides a deep sense of friendship.

And what I always dislike is info-dumping. And there was a lot of that in this novel. I mean, all those teenagers have grown up with the knowledge of supernatural creatures. That was only new to the reader. So, to properly introduce the reader into the author's world the characters constantly ask each other on every third page about each other's abilities. And also what they eat, how they dress, what they look like, how they reproduce, how fast they can run, climb, or move. I really feel like I know more than was necessary to be entertained.

"I'm much older than I look. Remember - werewolves don't age like humans."

Imagine a highly dramatic scene. The main character is seriously injured, there is a lot of pain involved. Two pages later, they talk. And talk and discuss their plans for like the hundredth time. I think you get the picture.

The novel could have been really really great and I have lots of high hopes for book two as we now hopefully know enough to concentrate on the plot and character development rather than strategic dialogues and exchanging information. The ending promises a lot of more action to come. And I'm really interested to see how the plot develops in the next two books of the Chelsie Valdar trilogy.

You have subscribed to alerts for Gina Marie Long.

You have been added to Gina Marie Long's favorite list.

You can also sign-up to receive email notifications whenever Gina Marie Long releases a new book.