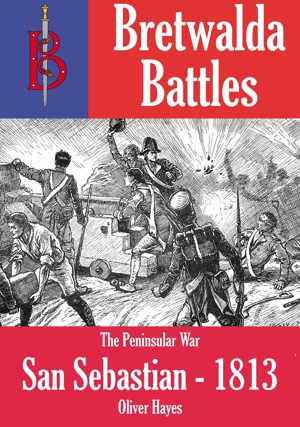 The British, Portuguese and Spanish armies of Lord Wellington had defeated the French in Spain and were poised to invade France itself. But the supply situation was critical. All of Wellington’s supplies had to come from Britain to Lisbon and were then carried over bad roads, mountain ranges and dusty plains for hundreds of miles to reach the fighting front.

What Wellington needed was a port with good harbour facilities close to the battle front. There was only one available, but it was held by a French force under the command of General Louis Rey who was desperately repairing and reinforcing the defences.

The siege began on 7 July 1813 and at first Wellington hoped it would be over quickly. But when the first assault failed it become clear that a long siege was inevitable.

This lavishly illustrated ebook is a must for anyone interested in the Peninsular War. It includes not only an account of the action itself, but studies of the commanders, the armies, the weapons and the tactics as well.
Available ebook formats: epub mobi pdf rtf lrf pdb txt html
First 20% Sample: epub mobi (Kindle) lrf more Online Reader
pdb
Price: $2.99 USD
Buy Add to Library Give as a Gift
How gifting works
Create Widget
Tags: spain british army wellington peninsular war napoleon siege french army
About Oliver Hayes