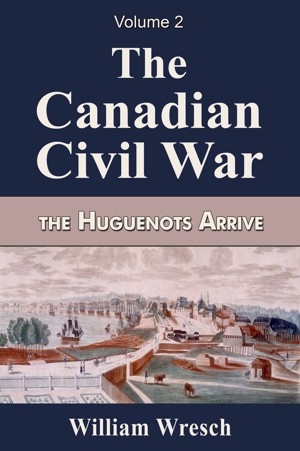 I have two sets of books here. The first is an alternative history of the US, envisioning how things might have gone had the French prevailed in the French and Indian War. That series comes from some personal experiences. I have canoed sections of the Fox, and driven along its banks. I have followed the voyageur route from the Sault to Quebec and traveled from Green Bay to New Orleans by car and by boat. My wife and I have spent many happy days on Mackinac Island and in Door County.

The Jessica Thorpe series is very different. It takes place in the tiny town of Amberg, Wisconsin, a place where I used to live. I wanted to describe that town and its troubles. Initially the novel involved a militia take over of the town, and it was called "Two Angry Men." But both men were predictable and boring. I had decided to have the story narrated by the town bartender - Jessica - and I soon realized she was the most interesting character in the book. She became the lead in the Jessica Thorpe series.

I restarted the series with a fight over a proposed water plant with Jessica balancing environmental rights and business rights. I put Jessica right in the middle of a real problem we are experiencing here in Wisconsin (and most other places). How badly does a tiny town need jobs? How much environmental damage should we accept?

Why does she go to Dubai in the next book? I spent a year teaching in Oman and wanted to reflect on that region and on my understanding of Islam. My daughter did two tours in Iraq, and my son did a tour in the Gulf, so this is important to me and my family.

The resort I used for an inspiration in book 3 is now closed - again. Too bad. I proposed to my wife there. There is no history of human trafficking there, but it certainly exists elsewhere, even here in rural Wisconsin. I know people are working hard to stop it, and I salute them.

The next two books reflect on some American history Ever since I read DeVoto's histories of the west, I have been interested in the Oregon Trail and the discovery of the Mississippi. There was so much more to the Oregon Trail than I knew, even though I have seen much of it. Writing Jessica's Oregon Trail book let me reread important elements of that history. As for the French and the Mississippi, I live just a few miles from where the Fox joins the Wisconsin. The sad looking lock that connects the two rivers is still there. As for the Iraq War elements, as I said, my daughter served two tours in Iraq. I wanted to reflect a bit on her experience, although the quotations in the book are fictionalized.

The final book in the series has multiple themes - small town life, the way social media is debasing our lives, the threat of climate change. The title comes from a trip my wife and I took to Glacier National Park last summer. We wanted to see the glaciers before they were all gone. Too late. We should have gone 50 years ago. It is a beautiful park, and I recommend a visit, but you won't see any glaciers. I had Jessica try to respond for us. As Jessica does her best in these circumstances, I hope she represents what most of us are trying to do - address real problems with care and concern for humanity. I fear things will get harsh fast.

You have subscribed to alerts for William Wresch.

You have been added to William Wresch's favorite list.

You can also sign-up to receive email notifications whenever William Wresch releases a new book.