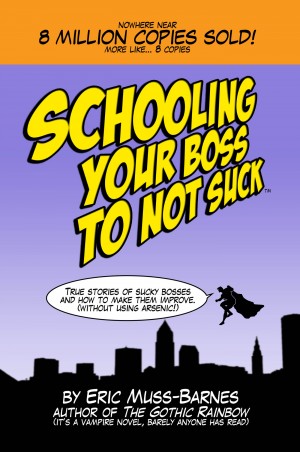 Schooling Your Boss to Not Suck

Is your boss a supervillain? Need a superhero to straighten him out? Instead of being written by another stuffy "expert", author Eric Muss-Barnes (who barely squeaked out of high school, let alone finished college), offers a lighthearted slant on leadership from the viewpoint of the common worker.

True stories. Real experiences. No silly parables here, folks. No "puppydogs and rainbows" like those other motivational books. Just genuine events of piss and vinegar from the American middleclass workplace.

Eric is just an Average Joe, like yourself, telling it like it is. If your boss sincerely wants to learn how to motivate and inspire the people, it's time the boss stopped listening to other leaders and started listening to what regular people like you have to say. It's time someone stood tall, whipped off those mild-mannered glasses, and schooled your boss on how to not suck!

You set the price! USD
Buy Add to Library Give as a Gift
How gifting works
Create Widget
Tags: business management personnel
About Eric Muss-Barnes

Raised by the 1940's swingkid generation of his maternal grandparents, Eric Muss-Barnes grew up 2500 miles outside of Los Angeles; has spent years working at Walt Disney Studios; piloted hang gliders over 6000 feet above the Earth; dated fashion models, rockstar goddesses and glamazon actresses; been thrown and dragged by horses (arguably similar to his dating experiences); earned a living as an American Greetings toymaker and a Hollywood game designer; ridden motorcycles through mountains and desert sandstorms (make that "over" mountains, he's not Buckaroo Banzai); produced, directed and edited music videos and an award-nominated film; briefly wed a tattooed MENSA astrophysicist chick; crewed on an Academy Award nominated movie; skateboarded in pools all around California with XGames medalists; written an epic series of vampire novels; photographed numerous Playboy models and sold his images in art galleries; been published in multiple fiction/non-fiction anthologies; served 12 years hard time in parochial schools; and created and programmed a blog called InkShard where you can see videos and essays about his life as a writer.

Schooling Your Boss to Not Suck
Author Eric Muss-Barnes reads a chapter sample.

You have subscribed to alerts for Eric Muss-Barnes.

You have been added to Eric Muss-Barnes's favorite list.

You can also sign-up to receive email notifications whenever Eric Muss-Barnes releases a new book.