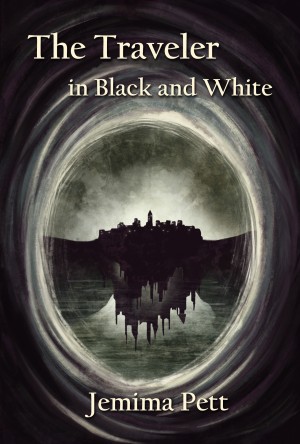 The Traveler in Black and White

By Jemima Pett
Rated 5.00/5 based on 3 reviews
A strange tunnel appears in the wall of Castle Hattan. Of course it must be investigated. What lies at the other end is a strangely backward land where things are not quite as they seem. Lord Mariusz adopts the pseudonym Hugo to explore the business opportunities he sees, only to be accused of murder; witness a vampire slaying; rub shoulders with ghouls, and have a close encounter with a werewolf. More
The fourth book in the Princelings series takes us back to Castle Hattan. Lord Mariusz, peeved at being cast as the villain in the first book, attempts to set the record straight. He narrates, in his own Humphrey Bogart fashion, how he found the time tunnel, and his adventures when he started to exploit the business opportunities he found on the other end. He explains how he came to master the art of time travel and why he has been the easiest person to blame for all the assassinations, supernatural phenomena, and industrial espionage he has seen on his adventures.

From his first morning at the Inn of the Seventh Happiness, where he has introduced himself as Hugo del Novo, he feels a strange disorientation. What is going on in this world? The papers are twelve years out of date, they speak with a strange accent, and write dates the wrong way round. The barkeeper’s cute hyperactive son tips him off as to the best stagecoach to take to start exploring, and then his troubles really start.

Trouble could have been Hugo’s middle name, since he certainly attracts it. Murder, vampires, dodgy business people, secret agents… Mind you, the upside is that he attracts beautiful females, too. And all the while he’s just trying to work out how to sell his drinks – and how to get them shipped down the time tunnel, stored in a safe and secret place, and keep his trusty agent Willow from falling asleep on the job. What is the secret of Vexstein’s bottling plant? Who knows what shady deals have been done before Hugo arrived? And how many contracts have been taken out on him while he’s just been trying to get contracts for drink deliveries set up and signed?

Meet old friends as their younger selves and make new ones as you follow Hugo’s adventures in the Princelings world – before Fred and George had even dreamed of leaving Castle Marsh!

The Traveler in Black and White is a fantasy mystery for ages 10 (PG) to 110.

Since Hugo (or Lord Mariusz) comes from Hattan, the book is written in US English.

Review by DHR:
This book is set earlier than The Princelings of the East Trilogy and rather than following Fred and George it follows Mariusz, Lord of Hattan, also known as Hugo. The entire book is from his perspective and is appropriately quite different in style to the other books. The excellent writing, exciting plot and brilliant characters are all very much still here!

Reviews of The Traveler in Black and White by Jemima Pett

This book is an enjoyable read, with a lovable cast of characters and a creative plot.

The comment in the publisher's summary about "Chandler-esque" is spot on. This book is for older kids, more of a PG-13 sort of thing, though references to sex are pretty oblique and will go over the heads of younger kids. The level of violence is a bit higher than in the first three Princelings books, too. That warning out of the way, this is a very engaging story, told by a rather American Hugo, a.k.a. Mariusz of Hattan (Manhattan, anyone? Just guessing. . . .), who is trying to learn his way around a strange world and make a buck.

The story takes us back ten years in the world of the Princelings, so that the characters from the other books are much younger (a very young Victor is a total charmer), and some we have grown to love don't show up at all (like Fred and George). The story is fast-paced, adventurous, and has just a touch of the supernatural. I wasn't sure at first I liked that (just a taste thing), but Ms. Pett handles it with her usual skill, and there is nothing in the story that isn't necessary.

In a departure from the earlier books, Hugo tells his own story in the the first person, and his hard-boiled attitude lends to the fun. This is definitely not a series that is giving us cookie-cutter books, but each addition has been my new favorite, and this one was no exception.

Recommendation:
For any readers old enough to cope with some violence and not to be put off by the implication that Hugo philanders a bit. Tweens up, with, as usual, as much or more appeal to adults as to the children.