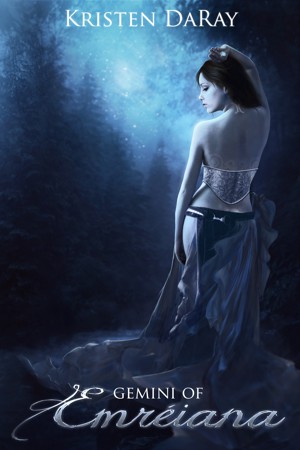 If I take the crown, I have to leave behind everything I have known here on Earth. I would have to say goodbye to my friends and leave behind Kyle, the boy I've loved since I was five. If I don't, then I risk the Bremoir finding me here on Earth and destroying everything I love.
Available ebook formats: epub mobi pdf lrf pdb html
First 20% Sample: epub mobi (Kindle) lrf more Online Reader
pdb
Price: $1.99 USD
Buy Add to Library Give as a Gift
How gifting works
Create Widget
Tags: love princess alien invasion gemini
About Kristen DaRay

Kristen was born in Alabama in 1991 and still resides there today. She has been writing since the 6th grade. However, she did not begin to write fiction until she was 15. In 2009, Kristen had an idea that would spark the concept for Gemini of Emréiana that she would later write in 2011. During that time, she met her husband. They married in August of 2012. Kristen continues to write the next novels to the Gemini Trilogy. She also plans to release a new series later on in the year.

Reviews of Gemini of Emreiana by Kristen DaRay

I have not read many YA novels, and decided to read this one as part of the book of the week feature being run by the Goodreads group I am a member of. I was pleasantly surprised by this debut novel by Kristen DaRay, which kept my interest from start to end.

It is a light read for a fantasy, with good pace. The interaction between the characters, especially that of Carson and her aunt or her boyfriend, was well handled, but I feel it lacked the emotional punch that could have added that little extra. Despite this, the characters are well developed and likeable, and you do begin to sympathise with the situations they find themselves in.

The story, and the writing, improves as the book progresses and the author draws out the truth behind Carson’s heritage, what lies ahead of her, and what dangers she will face because of who she is. The book left me intrigued to learn where Carson’s journey will eventually take her.

The writing could benefit from a little polishing, but this does not detract from the quality or the enjoyment of the story. Overall, a great effort, and I would recommend this book to anyone who loves YA fantasy/science fiction stories set in the modern world.

You have subscribed to alerts for Kristen DaRay.

You have been added to Kristen DaRay's favorite list.

You can also sign-up to receive email notifications whenever Kristen DaRay releases a new book.