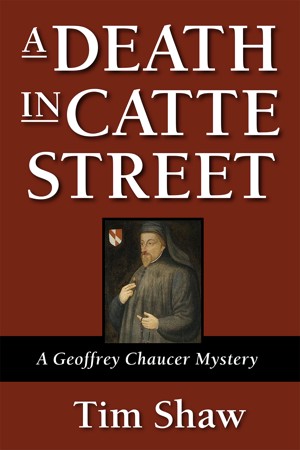 A Death in Catte Street

His fumbling investigations—while more underground deaths turn up—lead him into conflict with the London sheriff, a lecture on the king's finances, a large building in London that uses taxpayer money to support a single individual of no legal standing, and racist secrets from England's past.

This is the first in a proposed series that dovetails what is known about Chaucer through existing records and the culture of his time with fictional mysteries. A Notes section at the end of the book offers more detail on the people, places and events mentioned in the book. If you like learning about the Middle Ages through reading fiction, this is a book for you.
Available ebook formats: epub mobi pdf rtf lrf pdb txt html
First 20% Sample: epub mobi (Kindle) lrf more Online Reader
pdb
Price: $1.99 USD
Buy Add to Library Give as a Gift
How gifting works
Create Widget
Tags: fiction mystery history london 1300s medieval mystery geoffrey chaucer
About Tim Shaw

Tim Shaw has a MA in Medieval Studies, and is ABD (All But Dissertation) for a PhD in Medieval Studies. He blogs on the Middle Ages at http://dailymedieval.blogspot.com. He has a website for more background information on the history in his novels: http://www.chaucermysteries.com.

Reviews of A Death in Catte Street by Tim Shaw

You have subscribed to alerts for Tim Shaw.

You have been added to Tim Shaw's favorite list.

You can also sign-up to receive email notifications whenever Tim Shaw releases a new book.