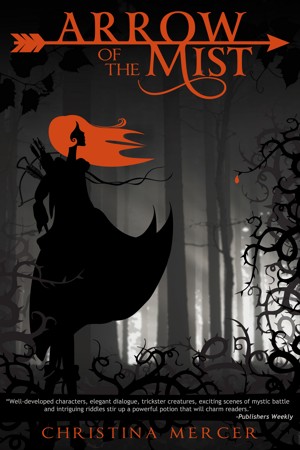 Arrow of the Mist

By Christina Mercer
Rated 5.00/5 based on 1 review
Award-Winning MG/YA Fantasy. Terror strikes the Celtic inspired kingdom of Nemetona when barbed roots breach the land and poison woodsmen, including Lia’s beloved father. Lia embarks on a quest to the land of Brume to find the cure. She relies on her herbal wisdom and new-found gift as a tree mage through a land of soul-hungry shades, trickster creatures, and uncovered truths about her family. More
Award-Winning Middle Grade/Young Adult Fantasy
Amazon Breakout Novel Awards; Writer's Digest Awards
Continue the adventure in sequel ARMS OF ANU

Terror strikes the Celtic inspired kingdom of Nemetona when barbed roots breach the veil of a forbidden land and poison woodsmen, including 15-year-old Lia’s beloved father. Lia and three others embark on a quest to the forbidden land of Brume to gather ingredients for the cure. But after her elder kinsman is attacked and poisoned, she and her cousin, Wynn, are forced to finish the quest on their own.

Lia relies on her powerful herbal wisdom and the memorized pages of her late grandmother’s Grimoire for guidance through a land of soul-hungry shades, trickster creatures, and uncovered truths about the origin of Brume and her family’s unexpected ties to it. The deeper they trek into the land, the stronger Lia’s untapped gift as a tree mage unfolds. When she discovers the enchanted root’s maker, it forces her to question everything about who she is and what is her destiny. Ultimately, she must make a terrible choice: keep fighting to save her father and the people of the lands or join with the power behind the deadly roots to help nature start anew.
Available ebook formats: epub mobi pdf lrf pdb txt html
First 10% Sample: epub mobi (Kindle) lrf more Online Reader
pdb
Price: $2.99 USD
Buy Add to Library Give as a Gift
How gifting works
Create Widget
Tags: fantasy magic tree young adult teen dwarf fairy wraith fairytale crystal celtic tween middle grade herbs arrow ranger potion grimoire shade mist teen heroine christina mercer tree nymph
About Christina Mercer

Christina Mercer is an award-winning author of fiction for children and young adults. Honored titles include Tween/YA Fantasy ARROW OF THE MIST and its sequel ARMS OF ANU, and YA Paranormal Romance HONEY QUEEN. She is also a once-upon-a-time CPA and the author of BEAN COUNTING FOR AUTHORS. Christina enjoys life in the foothills of Northern California with her husband and sons, a pack of large dogs, and about 100,000 honeybees.

To learn more about her and her writing, visit www.christinamercer.com

Reviews of Arrow of the Mist by Christina Mercer

I should preface this review by saying that I am a huge fan of epic fantasy and that anything Celtic has a particularly special place in my heart, thus I went in already loving the premise, but I had very high expectations.

About two chapters in, I went searching for the publisher because the prose was exquisite and I wanted to know who the editor was. I couldn’t believe this novel was self-published! It is without a doubt the best self-published book I have ever read.

Now more about the prose – the prose captures the atmosphere of this book perfectly. Lia is young, only fifteen, and quite innocent by modern standards. She’s the resident herbalist in her village and the writing reflects her love of nature with phrases like ‘I don’t give a thistle.’ These little gems were sprinkled throughout the novel and I found them delightful and true to character.

The story itself is a take on the classic Hero’s Journey and while I did feel at one point that their quest started to drag, it only lasted about half a chapter before the author threw something new and exciting into the mix. This novel has it all: faeries, shades, dwarfs, unicorns and sentient trees!

The world-building is fantastic, the division between the normal and the fae world reminding me of Gaiman’s Stardust, not in a derivative way but in a familiar, old-friend kind of way. This book definitely took me back to my childhood, to rainy afternoons spent reading with my mom about magical, far away places. The author clearly knows her stuff when it comes to herb lore and this showed through the characters, adding layers of authenticity to the world. The subtle borrowings from Celtic folklore made me smile too.

I did find the pervasive innocence of the characters more in line with what I’ve read in MG than in YA. These characters are neither cynical or jaded, rather refreshing from the usual YA set, but it does make the characters come across a bit young. I’d definitely recommend this book to fans of Janice Hardy’s Shifter series rather than fans of books like The Hunger Games and Graceling.

If I’m going to find anything to gripe about in this story it’s that Lia seemed to have an incredible memory and always managed to recount the perfect bit of lore from her Grandma’s book just in the nick of time. This method of saving the day became a little contrived after a while, but that’s honestly the only thing that took the shine away from a full 5 stars.

Oh and that ending! Really, we have to wait ’til the end of the year for more? This is one sequel I will definitely be reading and I don’t say that very often.

Final consensus, I absolutely adored this book! For fans of traditional fantasy who don’t mind their characters a little naive and their narrative squeaky clean. Arrow in the Mist gets 4.5 inksplats from me.(l

You have subscribed to alerts for Christina Mercer.

You have been added to Christina Mercer's favorite list.

You can also sign-up to receive email notifications whenever Christina Mercer releases a new book.