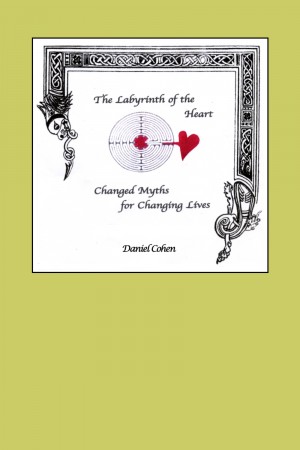 The Labyrinth of the Heart: Changed Myths for Changing Lives

By Daniel Cohen
Myths and folktales are retold in this book against the grain of the conventional tellings (which is why the subtitle refers to “Changed Myths”), as well as some new stories in a similar vein. My stories present new images of male heroes, who do not need to use violence to reach their goals. The stories are informed by the insights of goddess spirituality and feminism.

Daniel Cohen has been part of the Goddess movement in Great Britain since the late 1970s, and has connections to the Goddess movement in the United States. He combines this spiritual viewpoint with a commitment to gender justice and support of feminism. For more than twenty years he co-edited Wood and Water, a Goddess-centred feminist-influenced pagan magazine. Shan Jayran, who was influential in the British Goddess movement, described him as “a veteran and vital networker of the women’s and men’s movements, known for his highly influential support to innumerable Goddess people”.

He has been interested in myths and folktales since childhood. In recent years this has led him to become involved in storytelling.

His especial concern is to link these aspects of life by retelling and re-visioning old myths and stories so as to show men in relation to the Goddess. He believes that male domination of society has caused wounds to women and to men themselves, and that these new versions of powerful myths will inspire men to change their behaviour and to heal these wounds.

He is the author of the article on the Hebrew goddess Asherah in Patricia Monaghan's encyclopaedic Goddesses in World Culture.

His website contains several of his stories, together with articles and book reviews that appeared in Wood and Water.

You have subscribed to alerts for Daniel Cohen.

You have been added to Daniel Cohen's favorite list.

You can also sign-up to receive email notifications whenever Daniel Cohen releases a new book.