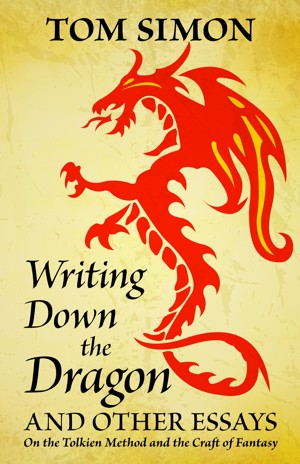 Writing Down the Dragon

By Tom Simon
Eleven essays on the Tolkien method and the craft of fantasy writing. More
'This book is not for the Wise, but for my fellow beginners in the craft of Fantasy, who are trying to learn some of the master's techniques and want to compare notes.' — From the introduction

There are shelves full of books about the works of J. R. R. Tolkien, most written from the perspective of academics and literary critics. Here is one from the point of view of the working fantasy writer. How did Tolkien produce his effects, and what can we learn from his methods? In this collection, Tom Simon investigates topics from the uses of archaic language to the moral philosophy of Orcs.

The Riddles of the Wise
The Tolkien Method
The Rhetoric of Middle-earth
Frodo's Vaunt
The Method and the Morgoth
What Is Elf?
The Terminal Orc
Writing Down the Dragon
Moorcock, Saruman, and the Dragon's Tail
The Abyss and the Critics
Lost Tales, Unattained Vistas

Like most writers, Tom Simon has had a wide range of peculiar jobs, from sysop of a dialup chat board (before the commercial Internet) to assistant in a Member of Parliament’s constituency office. One of his MP’s constituents was an ardent advocate for the population of elves who lived (so he said) in a patch of wild ground in the midst of the city. Mr. Simon regrets that he was never personally involved in dealing with elf issues. However, he has met the usual assortment of witches, wizards, and one creature who styled himself Archdruid of Canada.

A Canadian by birth, Mr. Simon lives in Calgary, but part of his heart will always remain among the mountains of British Columbia.

Reviews of Writing Down the Dragon by Tom Simon

You have subscribed to alerts for Tom Simon.

You have been added to Tom Simon's favorite list.

You can also sign-up to receive email notifications whenever Tom Simon releases a new book.